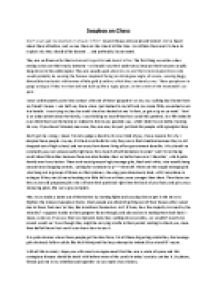 What I can't stand. Soapbox on Chavs

﻿Soapbox on Chavs Don?t even get me started on chavs! CHAV: Council House Anti-social and Violent. We?ve heard about them all before, and we see them on the streets all the time. We all hate them and I?m here to explain why they should all be banned ? and preferably incarcerated. They are well known for their advanced linguistics and decent attire. The first thing we notice when seeing a chav are their tracky bottoms ? or should I say their underwear, because their trousers usually hung down in the ankle region. They are usually aged about 16-22, and their stereotypical dress code would probably be wearing the famous snapback facing in a 90 degree angle, of course, wearing baggy fake adidas tracksuits with tonnes of fake gold jewellery which they can barely carry. ...read more.

If you haven?t already seen one, they are easy to spot, just look for people with a gangster limp. Don?t get me wrong, I mean I?m not a judge a book by its cover kind of guy, I have reasons for why I despise these people. Anyway it?s their own faults for why they are in that situation because they?ve all dropped out of high-school, and ran away from home living off on government benefits. Why should we constantly pay our unnecessarily high taxes for a bunch of self-homeless townies? And I?m not being sexist about this either because there are also female chavs or better known as ?chavettes?, which quite frankly aren?t any better. These anti-social group of ugly teenage girls, black and white, who usually hang around near shopping centres, waiting for someone to p*** them off. ...read more.

I suppose it adds to their gangster factor though, and also assists in making them look hard. I mean, come on, if we saw their un-matured, baby face walking down an alley, we wouldn?t exactly be scared would we? Even though they might be carrying a knife in their pocket waiting to shank you, more than half of them I bet won?t even know how to use it. It is quite obvious where these people get the idea from, it is all these disgusting celebrities; the teenage girls obviously follow celebs like Nicki Minaj and the boys attempt to imitate 50 cent and lil? wayne. With all this in mind, I hope you will come to an agreement that they are a waste of space and this contagious disease should be dealt with before more of the youth in today?s society catches it. So please, friends join me in my rebellion and together we can make chavs history. ...read more.