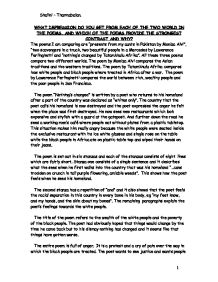 What impression do you get from each of the two worlds in the poems, and which of the poems provide the strongest contrast and why?

WHAT IMPRESSION DO YOU GET FROM EACH OF THE TWO WORLD IN THE POEMS, AND WHICH OF THE POEMS PROVIDE THE STRONGEST CONTRAST AND WHY? The poems I am comparing are "presents from my aunts in Pakistan by Moniza Alvi", "two scavengers in a truck, two beautiful people in a Mercedes by Lawerence Ferlinghetti and "nothing's changed by Tatamkhulu Afrika". All these three poems compare two different worlds. The poem by Moniza Alvi compares the Asian traditions and the western traditions. The poem by Tatamkhulu Afrika compares how white people and black people where treated in Africa after a war. The poem by Lawerence Ferlinghetti compares the world between rich, wealthy people and the poor people in San Francisco. The poem "Nothing's changed" is written by a poet who returns to his homeland after a part of the country was declared as "whites only". The country that the poet calls his homeland is now destroyed and the poet expresses the anger he felt when the place was first destroyed. He now sees new restaurants which look expensive and stylish with a guard at the gatepost. And further down the road he sees a working men's caf� where people eat without plates from a plastic tabletop. ...read more.

The poet describes the gifts of clothes her and jeweller sent to her by her aunts in Pakistan. She seems to be drawn to the loveliness of these things. The bright coloured salwar kameez, the candy-striped glass bangles and the apple green sari all seem to attract the poet but she still feels awkward in wearing them. It seems likes she feels more comfortable wearing English clothes "I longed for denim and corduroy". The writer compares the beautiful and bright clothes and jewellery from India to the boring cardigans from Marks and Spencers. The poet feels confused about her cultural identity because she felt English but at the same time she was attracted toward the pakistanian clothes and cultures. The poem is written in five paragraphs or verses and it is full of contrasting images eg. "a salwar kameez peacock blue (Pakistani) and demin and corduroy (English)". The first two paragraphs describes the clothes sent to the poet from her aunts in Pakistan and the rest of the paragraphs just describes how the poet feels about the clothes sent to her and how she feels about being born into a mixed culture. The knowledge of the birthplace of the poet only comes to her when she looks at old photographs. ...read more.

It also looks like the people in the Mercedes are educated business people who have well paid jobs. But on the other hand the guys in the garbage truck don't seem to be very educated and it does not look like as if their jobs pay them well either. Of the three poems I read I think the poem by Moniza Alvi has the strongest contrast. This is because through out the entire poem the writer describes in detail about how radiant the clothes and jewellery from Pakistan look in comparison to the dull denim and the corduroy worn by the English people and the cardigans found in Marks and Spencers. The poet describes how the salwar kameez from Pakistan glistens like an orange peal and embossed slippers which were gold and black in colour. And the sari was apple green with silver boarder. This shows that all the clothes from Pakistan were brightly coloured and looked nothing like the clothes worn by the English. The poet also gives a description of how the women in Lahore were treated. It seems from the poets' account the women in Lahore were kept in shaded rooms and prevented from talking to any male visitors. This also shows a great contrast. The women in England are free to talk to anyone they want and they can go anywhere they want but it seems like this is restricted in Lahore. Shalini - Tharmabalan. 1 ...read more.