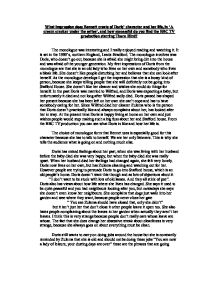 What impression does Bennett create of Doris'

What impression does Bennett create of Doris' character and her life, in 'A cream cracker under the settee', and how successful do you find the BBC TV production starring Thora Hird? The monologue was interesting and I really enjoyed reading and watching it. It is set in the 1980's, northern England, Leeds-Bradford. The monologue involves was Doris, who doesn't go out, because she is afraid she might bring dirt into the house and was afraid of the younger generation. My first impressions of Doris from the monologue are that she is an old lady who lives on her own and somebody who lives a bleak life. She doesn't like people disturbing her and believes that she can look after herself. As the monologue develops I get the impression that she is a bossy kind of person, because she keeps telling people that she will definitely not be going into Stafford House. She doesn't like her cleaner and wishes she could do things for herself. In the past Doris was married to Wilfred, and Doris was expecting a baby, but unfortunately it died and not long after Wilfred sadly died. Doris passed has shaped her present because she has been left on her own she can't cope and has to have somebody caring for her. Since Wilfred died her cleaner Zulema who is the person that Doris doesn't practically like and always complains about her, has looked after her in way. ...read more.

Zulema is constantly threatening her " I am the only person that stands between you and Stafford house. I have to report on you, the welfare says to me every time, well Zulema how is she copying? Wouldn't she be better off in Stafford house". The writer by using these phrases makes me feel sorry for Doris because I know the last place Doris wants to be is Stafford house. She wants to stay in her own home. I think the writer is trying to make the reader think that Zulema is bullying Doris. I think Bennett is suggesting to the reader that Doris is being bullied, but Doris isn't going to tell anyone because she knows she will end up in Stafford house. I think we are made aware of this by how Zulema makes Doris feel a troubled woman, her house is dirty and she doesn't like it. She thinks she has to clean it, but then she falls. She doesn't want help from the policeman because she thinks he will put her into Stafford House. However I think Bennett makes the reader think that Doris may not be aware of how old and incapable of living alone she is, especially when she falls off the buffet. The writer does make you wonder if Doris would be better off living in Stafford House where she would receive constant care and attention. ...read more.

Her appearance was mainly how I had described her: glasses, wrinkly, wavy grey curly hair, but I didn't expect her to have a chubby face. She was wearing a flowery dress with a pink cardigan over the top of the dress. I thought the performance of Thora Hird did influence my thoughts towards Doris as a character because she carried out the role just how I had imagined Doris i.e. her dress and her age. I thought Thora Hird's West Yorkshire accent was right for the part because she was slow, however on occasions quite amusing phrases were used. Seeing Thora Hird perform the role enhanced my enjoyment of the monologue, because although she was old she performed the part of Doris just like an old lady and made it interesting with her accent and by the way she said the amusing phrases that Bennet put into the monologue The director made use of the lighting by having it very dull to make it look like an old house. The sound he used was of a cornet and trumpet played with long drawn out notes with a piano in the background playing slow and soft. The overall music was sad. Overall I thoroughly enjoyed listening and reading the monologue. I like the way Bennet has added amusing phrases to the monologue to keep you interested and also by how he makes you feel sad and upset for the situation Doris is in. It is amusing in ways, but sad in many other ways. Tom Galloway ...read more.