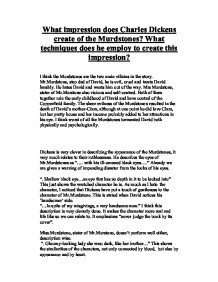 What impression does Charles Dickens create of the Murdstones? What techniques does he employ to create this impression?

What impression does Charles Dickens create of the Murdstones? What techniques does he employ to create this impression? I think the Murdstones are the two main villains in the story. Mr.Murdstone, step dad of David, he is evil, cruel and treats David harshly. He hates David and wants him out of the way. Mrs Murdstone, sister of Mr.Murstone also vicious and self-centred. Both of them together ruin the early childhood of David and have control of the Copperfield family. The sheer evilness of the Murdstones resulted in the death of David's mother-Clara, although at one point he did love Clara, but her pretty house and her income probably added to her attractions in his eye. I think worst of all the Murdstones tormented David both physically and psychologically. Dickens is very clever in describing the appearance of the Murdstones, it very much relates to their ruthlessness. He describes the eyes of Mr.Murdstones as ".... with his ill-omened black eyes...." Already we are given a warning of impending disaster from the looks of his eyes. ...read more.

Miss Murdstones in particular chooses to do the duties around the house, claiming to relieve the troubles of Clara. She says: ".... Give me your keys, my dear, I'll attend to all this sort of thing..." Only within a day, Miss Murstone already gains the authority in managing the house. "...From that time, Miss Murdstone kept the keys..." Mr.Murdstone, the only male who is older then David, gained the most authority around the house. One of the worst things he did was educating David and how it resulted in the psychological suffering; he did it with such strictness that it was unbearable. ". You must be far more careful to-day...." He eventually beat David for answering wrongly, ". Pray don't beat me!" Beating was not illegal at the time of Dickens, and Dickens wanted to express how cruel children were being treated during this period and how little anyone can act, because of the dominance of men. ". I heard my mother crying..." This sentence shows that even David's mother could not act to protest; even when a 'monster' is beating someone she loved dearly. ...read more.

For example when Clara was having a disagreement with Miss Murdstone about consulting development around the house, and Miss Murdstone is obviously winning, David naturally feels sorry for his mother. He says in first person narrative "..through the tears that stood in my eyes.." Using 1st person makes the situation more meaningful and more real and we readers feel more towards him. Dickens also shows his awareness of the symbolic value of words in his descriptions. The 'fetters' and 'rivets' worn by Miss Murdstone are effective symbols of the barren, unfeeling soul within. However, I think one of the best techniques Dickens uses is naming the characters. The Murdstones, who in my opinion are the main villains in the story, and their names are extracted from the words 'murder' and 'stone' which are both evil and cold blooded words. Stone is an object of sheer solidity and brutality. I have found the names resembled greatly on their personalities. Overall I think Dickens portrayed the Murdstones extremely well, not only in personality but also in the physical appearance and created a sense of evilness when they are around. ...read more.