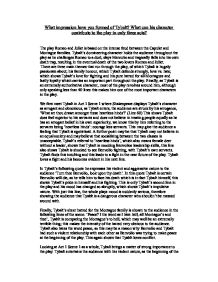 What impression have you formed of Tybalt? What can his character contribute to the play in only three acts?

What impression have you formed of Tybalt? What can his character contribute to the play in only three acts? The play Romeo and Juliet is based on the intense feud between the Capulet and Montague families. Tybalt's domineering character holds the audience throughout the play as he challenges Romeo to a duel, slays Mercutio and tragically falls into his own death trap, resulting in the eventual death of the two lovers Romeo and Juliet. There are three main themes that run through the play, of which Tybalt is hugely passionate about; his family honour, which Tybalt defends strongly, love vs. hate; which shows Tybalt's love for fighting and his pure hatred for all Montagues and lastly loyalty which carries an important part throughout the play. Finally, as Tybalt is an extremely authoritative character, most of the play revolves around him, although only speaking less than 40 lines this makes him one of the most important characters in the play. We first meet Tybalt in Act 1 Scene 1 where Shakespeare displays Tybalt's character as arrogant and obnoxious, as Tybalt enters, the audience are struck by his arrogance, 'What art thou drawn amongst these heartless hinds?' (Line 60) This shows Tybalt does feel superior to his servants and does not believe in treating people equally as he has an arrogant belief in his own superiority, we know this by him referring to the servants being 'heartless hinds': courage less servants. This may give the audience a feeling that Tybalt is egotistical. A further point may be that Tybalt may not believe in an equal society and may believe that socializing between the two classes is unacceptable. ...read more.

I feel this may be true as lions are in control and so is Tybalt. Despite Tybalt's hunter like fighting style, it may come to surprise that he is also a perfectionist, 'very butcher of a silk button' this proves that Tybalt is a quick fighter who shows accuracy and precision. In my opinion I feel the quote 'butcher' means fighting with pride and strength. I also think Tybalt is compared a butcher as he doesn't think much before he fights and treats it as it is his job as he frequently it. The language in this quote is metaphorical and gives the audience more emphasise on the quality of Tybalt's fighting. Overall the ideas Shakespeare explains to us about Tybalt are abundantly clear as we get a clear picture of just how great a fighter Tybalt was. Finally overlooking all the mishaps of Tybalt's arrogance and insults, funnily enough some may say he can be remarkably gentlemanlike 'gentleman of the very first house' Mercutio announces that Tybalt is a gentleman, and of the very first house which more or less means: best of the best. This may also illustrate that Tybalt is a fair fighter who plays by the rules. This gentleman like attitude also reflects earlier on in the play to Act 1 Scene 1 where Tybalt has also shown a similar attitude 'Have at thee coward' this is exact proof of what Mercutio is articulating as Tybalt is giving Benvolio a fair warning before he strikes and giving a chance for Benvolio to retaliate. Over all we have understood plenty from Mercutio's viewpoint on Tybalt as Mercutio is a Montague and from what I know, for a Montague to compliment a Capulet may not be the simplest of things. ...read more.

Many may have thought that now that Tybalt had died, all entertainment had been lost and it would have more or less been uneventful without him. On the other hand there were also some advantages to Tybalt's death, during the majority of the play Tybalt was the focus, however after his death the focus then turned on to Romeo and Juliet the main characters of the play, his unexpected death also brought and sense of sadness, which reminded the audience that the play was actually a tragedy. It would also be repetitive if Tybalt was not killed as then the play would continue with the same storyline, that is why Shakespeare decided to remove Tybalt, as the play needed a new focus. In addition, as Tybalt killed Mercutio by cheating, the audience are then pleased with his death, which causes a sense a of satisfaction to the audience and therefore, will contently watch the rest of the play, as if they were not pleased with his death, they would then express themselves completely, in a very rude manner! However as some have to understand, even though Tybalt was killed, his death carried a story, which then lead the play from then on... To conclude, I feel killing Tybalt was the right thing to as it gave Romeo and Juliet's story space to develop, I also feel it was the right decision as if Tybalt was still alive he would carry on troubling others and causing conflict. Moreover, Shakespeare decided to remove Tybalt from the play as the play is a tragedy and this tragic death reminds the audience of just that. By Farhin Bhatti ...read more.