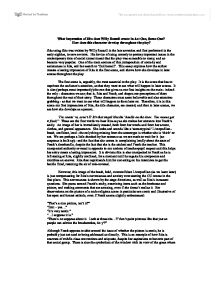 What impression of Rita does Willy Russell create in Act One, Scene One? How does this character develop throughout the play?

What impression of Rita does Willy Russell create in Act One, Scene One? How does this character develop throughout the play? Educating Rita was written by Willy Russell in the late seventies and first performed in the early eighties, to rave reviews. His device of using comedy to portray important issues in the contemporary time of social unrest meant that the play was accessible to many, and so became very popular. One of the main sources of this juxtaposition of comedy and seriousness is Rita, and her search to 'find herself'. This essay explores how the author creates a lasting impression of Rita in the first scene, and shows how she develops in later scenes throughout the play. The first scene is, arguably, the most essential to the play. It is the scene that has to captivate the audience's attention, so that they want to see what will happen in later scenes. It is also (perhaps most importantly) the one that gives us our first insights on the main - indeed the only - characters we see; that is, Rita and Frank, and shapes our perceptions of them throughout the rest of their story. These characters must seem believable and also attention-grabbing - so that we want to see what will happen to them later on. Therefore, it is in this scene our first impressions of Rita, the title character, are created; and then in later scenes, we see how she develops as a person. 'I'm comin' in, aren't I? It's that stupid bleedin' handle on the door. You wanna get it fixed!" These are the first words we hear Rita say as she makes her entrance into Frank's study. An image of her is immediately created, both from her words and from her accent, clothes, and general appearance. She looks and sounds like a 'stereotypical' Liverpudlian - brash, confident, loud - the only thing missing from the stereotype is whether she is 'thick' or not. ...read more.

"As soon as I walked in here I said...'He's a Flora man'" "A what?" "A Flora man." "Flora? Flowers?" "No...the bleedin' margarine...for people like you" As they carry on talking, Frank realises how eager and enthusiastic Rita is, and how much this step means to her. His insecurities are shown when he refuses to tutor her further, on grounds of inadequacy, even though the audience perhaps can already sense how much they can learn from each other. For, despite being opposites, they are in fact similar in one fundamental way; indeed, a way that is one of the main themes of the play; both are struggling to be released from the constraints of their social class. Rita is fed up of the (almost expected) shallowness of the working class and lack of choice she has in her life. The future strength of their relationship is indicated by how well it has started - and Rita's refusal to have a different tutor. Rita's education then begins in earnest. We see just how much she has to learn by the standard and style of her first essays, which are subjective and appreciative rather than critical. She also refuses to read Howard's End further when she is insulted by his apparent disregard for the needs of the poor; she is seeing the issue from a Marxist viewpoint and has to learn to interpret the literature without sentimentality - "Literature can disregard the needs of the poor", as Frank explains. The themes of Howard's End are in fact similar to those of Educating Rita - class division and differences; and Rita must overcome these to achieve her goal. As the first act progresses, each scene starts with Frank feeding back to Rita about an essay she has written in the intervening period, an effective method of showing the passage of time. Although Rita is learning new things with each visit to Frank, she is taking them too literally. ...read more.

Rita is angry because she thinks that the only reason for this is that Frank can no longer look down on her - "y'can no longer...watch me stare back in wide-eyed wonder...I know what clothes to wear, what books to read". It is at this point that the audience are made to wonder whether she has in fact developed at all, or just found a different "song to sing"; or indeed, merely another new dress, just in a middle-class style - a question echoed by Frank. The scene ends with the question unanswered; Frank calls out the names of 'classical' female writers when he discovers Rita has abandoned her 'trashy' pseudonym, mockingly. The final scene encompasses just how Rita has developed; she has thought over the argument and Frank's imminent departure helps her realise that she doesn't want him to leave thinking of her as the last scene ended. For Rita has in fact changed again. The heated exchange with Frank; her examination pass; and, importantly, her flatmate's attempted suicide have all contributed to her final attitude and personal growth; and she has achieved what she wanted. The fact that Trish, someone she looked up to and regarded as content with her life, tried to commit suicide showed her that those in the middle class do not have perfect lives (as she once thought), and that student (symbolic of the middle class) are flawed like anyone else. This leaves Rita (or Susan as she has by this time reverted to) with a sense of perspective, and, ultimately, choice - her main objective. She has also pleased Frank by becoming who she wanted be and more - a thing she wanted out of gratitude to him for helping her reach this point. Rita now can choose what she wants to do, and on this note the play ends; without a firm decision on the path she will take. This allows the audience to decide the ending for themselves, and the alternatives all seem happy ones - for Rita has, through her own self-discovery and Frank's help, found 'herself'. ...read more.