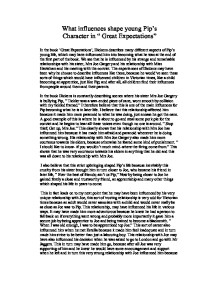 What influences shape young Pip's Character in " Great Expectations" In the book 'Great Expectations', Dickens describes many different aspects of Pip's young life, which may have influenced him into becoming what he was at the end of the first part of the book. We see that he is influenced by his strange and remarkable relationships with his sister, Mrs Joe Gargery and his relationship with Miss Havisham and his meeting with the convict. The experiences of Dickens may have been why he choose to describe influences like these, because he would've seen these sorts of things which would have influenced children in Victorian times, like a child becoming an apprentice, just like Pip; and after all, all children find their influences from people around them and their parents. In the book Dickens is constantly describing scenes where his sister Mrs Joe Gargery is bullying Pip, " Tickler was a wax-ended piece of cane, worn smooth by collision with my tickled framed." I therefore believe that this is one of the main influences for Pip becoming what he is in later life. I believe that this relationship affected him because it made him more paranoid to what he was doing, just encase he got the cane. A good example of this is where he is about to go and steal some pork pie for the convict and he begins to hear all these voices even though no one is around. ...read more.

" People are put in Hulks." This chilling statement by his sister made Pip very afraid of the punishments you would receive in prison and therefore made him a better-rounded individual who we never really see getting in trouble in later life. Instead he turns into a very polite and well-rounded young man and this in turn leads him to strive to become a good Samaritan. This meeting with the convict also had one other affect on his later life because it was the convict himself who sponsored Pip and gave him the opportunity to go to London and become a great businessman. This all stems from the kindness that Pip showed him when he meet him on the dykes and banks of the marshes and then the convict repays that generosity by giving him the money to follow his dreams in London. Therefore his meeting with the convict did have a great influence on his later life in many ways but most importantly it gave him the chance to become somebody in London. Also in the first book was his very strange relationship with Miss Havisham and I also believe that this relationship influenced him in various ways. Firstly Miss Havisham influences him by introducing him to Estella. This then leads her to torture him for being nothing but a common labouring boy and also how he calls Jacks, Knaves is very amusing to her. ...read more.

Finally I think that his employment in being a blacksmith may have influenced him and may have made him see how lucky he was to have a job in the first place. Because after all children in those days would have been sent to workhouses at an early age and would've in some cases died in atrocious circumstances. I think that the fact that he became a blacksmith may have brought him closer to Joe and in turn made him the kind and grateful person we see at the end of the book. I also believe that when he got this job he then saw how truly grimy and common it was and therefore made him see what Estella was talking about when she bullied him and also made him strive to become better educated and in turn get a better job in London, which turn made him become a greater person in the capital. So in this way I believe that the fact he was an orphan and how he got a steady job with Joe may have influenced him in the future. Overall I believe that many things influenced Pip in his younger life, be it his sister, his numerous relationships with strange people including the convict or even his very loving and caring relationship with Joe. But overall I believe that these things did change Pip's life for the better in my opinion and in turn made him go to London with Mr Jaggers and made him the rounded person we see at the end of the first book. ...read more.