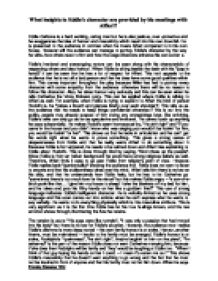 What insights to Eddie's character are provided by his meetings with Alfieri?

What insights to Eddie's character are provided by his meetings with Alfieri? Eddie Carbone is a hard working, caring man but he is also jealous, over-protective and he exaggerates the idea of honour and masculinity which result into his own downfall. He is presented to the audience in contrast when he meets Alfieri compared to in his own house. However still the audience can manage to portray Eddie's character by the way he talks, how others react to him and how the stage directions enhance his own actions. Eddie's irrational and stereotyping nature can be seen along with his characteristic of respecting others and also honour. When Eddie is sitting beside the desk with his "(cap in hand)" it can be seen that he has a lot of respect for Alfieri. This trait appeals to the audience that he is not all a bad person and that he does have some good qualities within him. This comes important throughout the play because Miller has had to portray every character with some empathy from the audience otherwise there will be no reason to follow this character. ...read more.

Honour, another theme, must be maintained - insults to the family must be avenged. Eddie's honour is at stake, Rodolpho's "quaintness", "he ain't right", they're laughin' at him on the piers", "I'm ashamed" is the part of the reason Eddie does not want Catherine marrying him, because if she does then Rodolpho will be family and 'they' would be laughing at Eddie too. "When I think of that guy laying his hands on her I could - I mean it's eaten me out." This shows Eddie's masculinity that he doesn't want anything to go wrong and the fact that he must not be insulted in front of anyone and that his family must not let him down. When he says "it's eaten me out" Eddie is implying that his anger is taking control of himself and that he can't resist this. Eventually he becomes so frustrated that he doesn't even care about Alfieri's advice. This shows his anger and how quickly violence can take over his mind. Eddie's incest motive is hinted by Alfieri in the meeting when Eddie is talking about how fatherly he has treated her. ...read more.

When Eddie heads for the telephone booth, "(jaws clenched)" it demonstrates his active, physical side of himself and that when he can't get things across by words, he has to do them by actions and in this sense even though he is not fighting anyone, he is showing his determination and will to do anything that he likes without asking anyone, let alone seeking Alfieri's last advice. Eddie is clearly the 'common man as the tragic hero' and all of the attributes that make him up are the cause of his downfall. He feels that everything has to be done in terms of his own advice and that is how he wants for everything to work like clockwork. The meetings that he has with Alfieri tell us a great deal about Eddie and the stage directions that accompany him show his fatal flaws which are jealousy, over-protectiveness, irrationality and the fact that when he can't articulate - he turns to violence. Alfieri is a means use by Miller to make us sympathetic towards Eddie. Finally, another flaw in Eddie is that the advice Eddie has been given from Alfieri is a very good advice; but the rejection of this demonstrates Eddie's flaw of being stubborn and perhaps too masculine. ?? ?? ?? ?? Franky Saxena 10U ...read more.