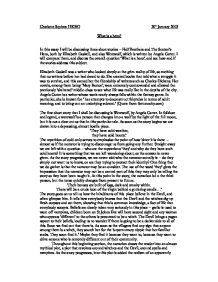 What is a hero? In this essay I will be discussing three short stories - Half Brothers and The Sexton's Hero, both by Elizabeth Gaskell, and also Werewolf, which is written by Angela Carter.

Charlotte Squires 11KBO 30th January 2003 What is a hero? In this essay I will be discussing three short stories - Half Brothers and The Sexton's Hero, both by Elizabeth Gaskell, and also Werewolf, which is written by Angela Carter. I will compare them, and discuss the overall question 'What is a hero', and see how and if the stories address this subject. Elizabeth Gaskell was a writer who looked deeply at the grim reality of life, something that no writers before her had dared to do. She created books that told what a struggle it was to survive, and this earned her the friendship of writers such as Charles Dickens. Her novels, among them being 'Mary Barton', were extremely controversial and allowed the previously 'sheltered' middle-class to see what life was really like in the depths of the city. Angela Carter is a writer whose work nearly always falls within the fantasy genre. In particular, she is known for ' her attempts to deconstruct fairytales in terms of adult meaning, and to bring out an underlying subtext.' (Quote from fortunecity.com) The first short story that I shall be discussing is Werewolf, by Angela Carter. In folklore and legend, a werewolf is a person that changes into a wolf by the light of the full moon, but it is not a clear cut as that in this particular tale. As soon as the story begins we are drawn into a depressing, almost hostile place. 'They have cold weather, they have cold hearts.' The repetition of cold only serves to emphasise the point of how bitter it is there - almost as if the narrator is trying to discourage us from going any further. Straight away we are left with a question - who are the mysterious 'they' and why do they have such cold hearts? It is something that we are left wondering about, as the answer is never given. ...read more.

There is an emphasis on Helen's age here, as well as an undertone of jealousy from Aunt Fanny. Aunt Fanny tells the narrator how the couple never asked her advice, and how, eventually she began to take a 'brighter view of the marriage.' It is here that we get the first real ideas as to just how much Aunt Fanny adores and focuses her attention onto Gregory. 'But much as she had loved Gregory before, she seemed to love him more now.' It is as if Aunt Fanny is attempting to 'blinker' herself from what is going on around her - and she has good reason, as we soon find out that Helen and William's marriage is a loveless one. Again, Gregory is the object of affection, and William soon realises it. 'But she did not love him and he soon found it out. She loved Gregory and she did not love him.' The narrator tells how Helen really came alive when she was with Gregory, but how she had only 'gentle words as cold as ice' for William, making us wonder further whether she did only marry for her family's security. William is jealous of 'the ready love' that Helen had for Gregory, and is hostile towards him, even going so far as to one day loose his temper and swear and curse at Gregory. Here, time becomes slightly skewered. The narrator says; '...my mother took to her bed before her time and I was born that very day.' This is the part in the story where the narrator is born, but we have had no mention of the pregnancy up until this point. Perhaps the narrator saw this event as insignificant and too unimportant to mention, but how could one see one's birth as being insignificant? We are told how William, whilst being unable to 'accept' Gregory, is delighted that he has a son and says that he is sorry for the state that his wife is in. ...read more.

The baby is referred to as 'it' in the next paragraph, which in contrast seems very impersonal for someone you would think is loved so much. It is in this paragraph that we get the first indication that something is going to go wrong. The Sexton and Letty are on their way to a wedding, and the Sexton says; '...last time I ever saw Letty laugh heartily; and for that matter, last time I ever laughed downright hearty myself.' This again sets up questions for the remaining part of the story - what is going to happen to make the Sexton and Letty so unhappy? The trouble starts innocently enough - with the couple realising that the sun has set, and that time is getting on. The Sexton describes with thorough detail the exact location of where they were when this happened, as if to deflect from the obvious panic that is going to ensue. Much like in the half brothers we feel the Sexton's panic, and we feel the suspense at the realisation that they are lost and running into trouble in the water. 'It were growing darker and darker above and around us, all but one line of red light above the hills.' This part of the story has a slightly claustrophobic feeling - 'above and around' gives the feeling of enclosure, of deep setting panic. The tone of the story becomes more frantic, like the sea closing in on Letty and the Sexton. Gaskell uses phrases like 'rushing tide' and 'like a galloping horse', all of which build up the tension well -because the Sexton himself is telling the story, we really feel the panic ourselves. The Sexton is trying to be quiet so as not to frighten Letty - the only words that he mutters are 'Lord help us!', which is again a religious reference. They have a pig with them in the back of the cart, and this pig is screeching and squealing for dear life - the Sexton is staying silent, and it is almost as if the Sexton's fear is being conveyed through the pig. ...read more.