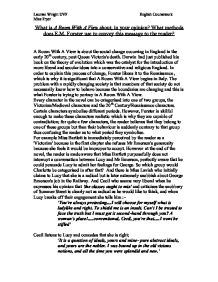 What is A Room With A View about, in your opinion? What methods does E.M. Forster use to convey this message to the reader?

What is A Room With A View about, in your opinion? What methods does E.M. Forster use to convey this message to the reader? A Room With A View is about the social change occurring in England in the early 20th century, post Queen Victoria's death. Darwin had just published his book on the theory of evolution which was the catalyst for the introduction of more liberal and secular ideas into a conservative and religious England. In order to explain this process of change, Forster likens it to the Renaissance, which is why it is significant that A Room With A View begins in Italy. The problem with a rapidly changing society is that members of that society do not necessarily know how to behave because the boundaries are changing and this is what Forster is trying to portray in A Room With A View. Every character in the novel can be categorised into one of two groups, the Victorian/Medieval characters and the 20th Century/Renaissance characters. Certain characters symbolise different periods. However, Forster is skilful enough to make these characters realistic which is why they are capable of contradiction; for quite a few characters, the reader believes that they belong to one of these groups but then their behaviour is suddenly contrary to that group thus confusing the reader as to what period they symbolise. For example Miss Bartlett is immediately perceived by the reader as a 'Victorian' because in the first chapter she refuses Mr Emerson's generosity because she feels it would be improper to accept. ...read more.

Even so, Forster often describes Lucy as 'bewildered' or 'again conscious of some new idea'. Lucy's development throughout the novel is a metaphor for her society's development, Forster uses Lucy as another method to portray the social change. It is a more effective for Forster to write A Room With A View in the third person - but with Lucy's thoughts included - rather than simply writing the novel from Lucy's point of view, because this gives the book perspective; this perspective is possibly an explanation of the title. When Forster describes an important scene in the novel, he always includes a description of the natural surroundings, Before the murder which Lucy witnesses in the square, Forster describes the twilight; the twilight is significant because it symbolises a transition for George and Lucy, as it is a transition between day and night. Similarly the scene of George and Lucy's kiss is preceded by a description of the surroundings; 'From her feet the ground sloped sharply into the view, and violets ran down in rivulets and streams and cataracts, irrigating the hillside with blue, eddying round the tree stems, collecting into pools in the hollows, covering the grass with spots of azure foam. But never again were they in such profusion; this terrace was the well-head, the primal source whence beauty gushed out to water the earth. Standing at its brink, like a swimmer who prepares, was the good man.....George had turned at the sound of her arrival. ...read more.

Love is beginning to replace Religion in this era. Lucy, as said above, represents society and when she chooses love over social obligation she is demonstrating society's loosening of its old restraints. When Mr Beebe rejects her and George, he is rejecting secularisation. People of this era are losing faith in religion and replacing it with faith in soul mates, however social restraints increased the difficulty of following one's heart because society felt it was 'improper' to admit to one's true feelings. Freddy calls Lucy and George's marriage an 'elopement' because they have married for love. Forster's novel is almost an encouragement to people of his era to lose their inhibitions and follow their hearts; he highlights the stupidity of the times, where people believed in love, but despise those defied convention to marry for love. His novel is successful at doing this because it glorifies passion and impulsiveness; he mocks those symbolising convention such as Cecil, Mr Eager and Miss Bartlett and endorses those that represent love and liberalisation. Cecil doesn't just represent convention he also represents 'culture'. Lucy and George marry in the end to everyone's surprise because it is Forster's hope to encourage romance. Although Forster's novel is dealing with specific events occurring in English history it never the less remains a novel which is still enjoyed today because it deals with the universal theme that love conquers all. The characters are creations that live today just as they did as when the novel was first published, because they are so realistic and familiar to the reader. Laurian Wright UVF English Coursework Miss Fryer ...read more.