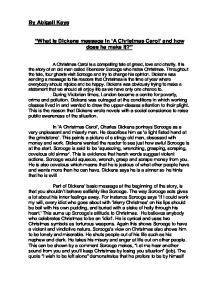 &quot;What is Dickens message in 'A Christmas Carol' and how does he make it?&quot;

By Abigail Kaye "What is Dickens message in 'A Christmas Carol' and how does he make it?" A Christmas Carol is a compelling tale of greed, love and charity. It is the story of an old man called Ebenezer Scrooge who hates Christmas. Throughout the tale, four ghosts visit Scrooge and try to change his opinion. Dickens was sending a message to his readers that Christmas is the time of year where everybody should rejoice and be happy. Dickens was obviously trying to make a statement that we should all enjoy life as we have only one chance to. During Victorian times, London became a centre for poverty, crime and pollution. Dickens was outraged at the conditions in which working classes lived in and wanted to draw the upper-classes attention to their plight. This is the reason that Dickens wrote novels with a social conscience to raise public awareness of the situation. In 'A Christmas Carol', Charles Dickens portrays Scrooge as a very unpleasant and miserly man. He describes him as 'a tight fisted hand at the grindstone'. This paints a picture of a stingy old man, obsessed with money and work. Dickens wanted the reader to see just how awful Scrooge is at the start. Scrooge is said to be 'squeezing, wrenching, grasping, scraping, covetous old sinner'. This is evidence that harsh words suggest violent actions. Scrooge would squeeze, wrench, grasp and scrape money from you. He is also covetous which means that he is jealous of what other people have and wants more than he can have. Dickens says he is a sinner so he hints that he is evil! Part of Dickens' basic message at the beginning of the story, is that you shouldn't behave selfishly like Scrooge. The way Scrooge acts gives a lot about his inner feelings away. For instance Scrooge says 'If I could work my will, every idiot who goes about with 'Merry Christmas' on his lips should be boil with his own pudding, and buried with a stake of holly through his heart.' ...read more.

Scrooge sees his final conversation with his fianc�e, where he chooses money over love. She tells him he has changed and is starting to l**t after money. She tells him "I release you. With a full heart, for the love of him you once were." Scrooge is shown that there is more to life than money and it shows him that money does not buy happiness, as he was once happy with out money. He comes to realise that ever since he has been wealthy, he has also been angry, sad and alone. Scrooge is regretful and angry with himself for choosing money over love. He cannot bear the sorrow he is feeling, but unfortunately for him, the Spirit has one more thing to reveal to him. Scrooge is then shown his ex-fianc�e, happily married and surrounded by her family. Dickens is making a desperate point that this family could have been his if only he hadn't been so egotistical. Scrooge watches the daughter and wishes he had a daughter that loved him as much as the girl loved her own father. Evidence of this is the quote, "when he thought that such another creature...might have called him father". This indicates that he is dreaming of what could have been if only he had chosen the right path. When the husband enters the room and mentions that he saw Scrooge, how his partner (Marley) had died and how he was "quite alone in the world", Scrooge manages to conceive how people think of him. He doesn't like witnessing the truth because I think he knows it is true so he pleas with the ghost to "remove me from this place". He can't handle the reality, "I cannot bear it", and wants to go home. The fact that Scrooge has already had enough suggests that he is already regretting the past decisions he foolishly made. ...read more.

I will live in the past, the preset and the future. The Spirits of all Three shall strive within me. I will not shut out the lessons that they teach. Oh, tell me I may sponge away the writing on this stone!" In this speech he shows repentance and remorse at his previous life and vows to life every day for the present and to honour Christmas always. I believe that Dickens was trying to say that nobody is completely evil and has some good in them, they just need to look inside themselves to find it. Scrooge learns from the spirits and changes his ways. He is mainly frightened into changing but also is moved by the scenes he witnesses for instance the cheer at Bob Cratchit's house. The fact that Scrooge transforms into a happy man shows that we can make up for our bad behaviour and that we all can change for the better. At the end of the narrative, Scrooge becomes "as good a friend, as good a master, and as good a man, as the good old city knew", he becomes a cheerful man that everyone loves and proves that you can become something you never thought you could be! I think "A Christmas Carol" has been so successful due to the fact that it appeals to those who are able to communicate with our innerselves. It is such a classic story, and is remembered today as the "one and only" Christmas story. It appeals to the socially conscious of us, and it makes us actually stop and think about the world today. I believe it will still be relevant another hundred years from today as their will always be the problem of social divisions as it is in human nature to demonstrate our faults. We are not perfect and so will show when we don't particular like something. I think it is so powerful because Dickens was not writing just for the audience of his era but was writing for everybody in any time. Maybe he knew it would still have such relevance today? ...read more.