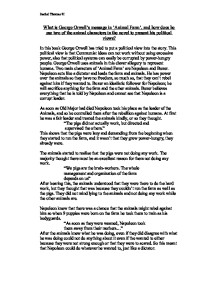 What is George Orwell's message in 'Animal Farm', and how does he use two of the animal characters in the novel to present his political views?

What is George Orwell's message in 'Animal Farm', and how does he use two of the animal characters in the novel to present his political views? In this book George Orwell has tried to put a political view into the story. This political view is that Communist ideas can not work without using excessive power, also that political systems can easily be corrupted by power-hungry people. George Orwell uses animals in this clever allegory to represent humans. Two main characters of 'Animal Farm' are Napoleon and Boxer. Napoleon acts like a dictator and leads the farm and animals. He has power over the animals so they have no freedom, so much so, that they can't rebel against him if they wanted to. Boxer an idealistic follower for Napoleon; he will sacrifice anything for the farm and the other animals. Boxer believes everything that he is told by Napoleon and cannot see that Napoleon is a corrupt leader. As soon as Old Major had died Napoleon took his place as the leader of the Animals, and so he controlled them after the rebellion against humans. At first he was a fair leader and treated the animals kindly, or so they thought. "The pigs did not actually work, but directed and supervised the others." This shows that the pigs were lazy and demanding from the beginning when they started to run the farm, and it wasn't that they grew power-hungry, they already were. ...read more.

When the animals read this they did not remember the last two words but Napoleon made it seem that it had always been there and made it look as if the animals were stupid and had no memory. Napoleon did not seem to mind that he was lying to his followers. He seemed to like the fact that they would believe anything he says. Boxer was a loyal follower for Napoleon but when Napoleon knew that Boxer was no more use to him he discarded him in a way that made all the animals horrified. "They are taking Boxer to the knacker's!" What made the animals more amazed was that Napoleon didn't seem to mind that he was sending his best worker to die a painful death. What astounded them more was that Napoleon was making money out of this. Napoleon denied all of this and said that Boxer was taken to a hospital and died peacefully, many animals did not seem totally convinced. Boxer is an excellent follower for Napoleon as he believes what he is told and would do anything to help an animal. Boxer had two slogans, one of these is: "I will work harder." This slogan shows how much work Boxer did for the farm and how he wanted to do everything to his best ability. ...read more.

Boxer and Napoleon are two very different characters; they are not similar in any way. Boxer cares about the animals and would do anything for them and Napoleon only seems to care about himself and thinks of the animals as slaves. The animals on the farm seem to respect Boxer very highly but they are terrified of Napoleon and his bodyguards. The animals, because of their respect for Boxer, would do anything for him out of their own good will, but the only reason that they might do anything for Napoleon is because they know if they don't, Napoleon will do something to them, or maybe not give them any food. Although for Boxer this is not true because he is a gullible character and trusts Napoleon with his life and would do anything for him. Napoleon would definitely not do any thing for Boxer, which is shown by the way that Napoleon kills Boxer. Napoleon wants all the animals to do what he wants them to do, because he likes being in control. Boxer on the other hand likes to be told what to do and doesn't seem to like being in the limelight. All featured of Napoleon's personality are very similar to dictators. A couple of these are, lazy, ruthless, lying to followers and doing things to suit only them (changing laws). Boxer on the other hand represents an extremely generous person (the kind of follower that all dictators dream of) and always thinks of others before himself. Rachel Thomas 9I ...read more.