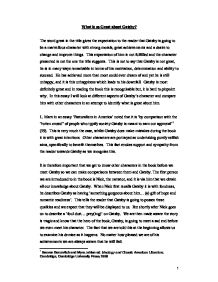 What is so Great about Gatsby? The word great in the title gives the expectation to the reader that Gatsby is going to be a marvellous character with strong morals, great achievements and a desire to change and improve things.

What is so Great about Gatsby? The word great in the title gives the expectation to the reader that Gatsby is going to be a marvellous character with strong morals, great achievements and a desire to change and improve things. This expectation of him is not fulfilled and the character presented is not the one the title suggests. This is not to say that Gatsby is not great, he is in many ways remarkable in terms of his motivation, determination and ability to succeed. He has achieved more than most could ever dream of and yet he is still unhappy, and it is this unhappiness which leads to his downfall. Gatsby is most definitely great and in reading the book this is recognisable but, it is hard to pinpoint why. In this essay I will look at different aspects of Gatsby's character and compare him with other characters in an attempt to identify what is great about him. L. Marx in an essay 'Pastoralism in America' noted that it is 'by comparison with the "rotten crowd" of people who typify society Gatsby is meant to earn our approval'1 (59). This is very much the case, whilst Gatsby does make mistakes during the book it is with great intentions. Other characters are portrayed as undertaking purely selfish aims, specifically to benefit themselves. This fact evokes support and sympathy from the reader towards Gatsby as we recognise this. It is therefore important that we get to know other characters in the book before we meet Gatsby so we can make comparisons between them and Gatsby. The first person we are introduced to in the book is Nick, the narrator, and it is via him that we obtain all our knowledge about Gatsby. ...read more.

There is a man simply described as being 'about my age' and quite unremarkable. This is out of the ordinary for many reasons; firstly that we have to wait a long time to be introduced to Gatsby and yet he is the books hero and title character, he is built up in our minds as something different and almost mythical. Yet here we see a very human image presented, he is an army man, which, immediately displays a sense of mortality about him, his persona may be a myth but he is physically very real and there is nothing which distinguishes him in that way from anybody else. We do not at this point get an impression that Gatsby is great and neither does he himself despite the character being his own invention he is quick to criticise himself saying 'I'm not a very good host'. This shows to us that he is not without fault and that he is aware of those faults. It also enforces a new image of the character, the man who was previously allusive and unobtainable now appears very ordinary. It is the reader's first indication that there may be something going on beneath the surface of his character which is far from ordinary. We learn more about this through his interaction with the other main characters and with people in general. Although at first it appears as though he keeps himself very much to himself he actually has interaction with all the other main characters. And for this reason we are able to view Gatsby in many different roles. To Nick he becomes a friend, in this role Gatsby is generous and loyal it is said 'he would never so much as look as a friends wife'. ...read more.

She merely desires more money for herself and if she shows love for anybody or anything in the book then it is money. In conclusion Gatsby appears great at the start because he possesses a lot and looks to be someone people admire, but the bitter truth is quite different. He does not have any real friends except, perhaps, Nick and this is not entirely his own fault. He took the task upon himself to achieve great things and he achieved that aim without hurting anybody else. But people wanted to see him lose what he had fought to obtain because it threatened their own positions in society. Any relationship they appeared to hold with him were merely for their own benefit and Gatsby was too na�ve to realise this. So he is great because despite all his masks he manages to hold more truth and depth of character than those around him, his act is harmless. Those people around Gatsby who pretend to be friends and pretend to be there for him; their act is not harmless, they are out to destroy him and even through his death they do not achieve this aim. They wanted Gatsby to be revealed for what he was, a fraud, and were so determined that this happened that even when he died they held their grudges. By not turning up to Gatsby's funeral instead of burying his persona they enabled it to live on as a legend. He never does not get Daisy but his mystery is retained, nobody really knows how he made his money and the myths and rumours he thrived on are still spread about him. The character of Gatsby that was created could never be destroyed and neither could his achievements. ...read more.

This is an excellently-formed piece of coursework. It's analysis is good, and it draws a nice, concise conclusion from such an extensive length. There is a good understanding of the character and how other characters perceive him - though perhaps ...

This is an excellently-formed piece of coursework. It's analysis is good, and it draws a nice, concise conclusion from such an extensive length. There is a good understanding of the character and how other characters perceive him - though perhaps not quite as firm a hold how the reader sees Gatsby (after all, we only see him through Nick's eyes, and Nick contradicts himself a lot in the novel as he finds himself repelled by and attracted to Gatsby's opulent life-style). Nonetheless, there is a sensitive appraisal of how the character is formed and a good understanding of his back story, all of which are implemented into analysis that calls to question the apparent irony of labeling Jay Gatsby a "Great" man. It is correctly noted early on that perhaps the title, unlike so many come to fully realise, is not actually ironic. Once Nick leaves West Egg he sobers from his party-intoxicated mind and realises that actually Gatsby was the most real person he ever met there, and that is because Gatsby never originally grew up in the life-style, and so had is moral built on arguably more sturdy foundations. It appears a little understood, the process by which Gatsby acquired his money though, as he participated in bootlegging and illicit alcohol laundering, often having to kill men in the process, so he did actually hurt some people, but this is testament to his undying fervour to seek Daisy Buchanan, and hence why Nick refers to him as "Great". All this is here in this candidate's essay, but some areas are slightly more 'woolly' than otherwise and find it hard to pinpoint want they want to say. To a literature student it is clear, but I would recommend being a little more precise in the future, so that if an examiner is instructed to act as if they are not familiar with the text you can avoid common pitfalls that may cost marks.

The Level of Analysis is very good. Though not exhaustive, the candidate considers a number of theories as to the title calling Gatsby "Great". It is a common misconception that this is an ironic move and that Fitzgerald is saying there was in fact nothing admirable about Gatsby. But due to this candidate close attention to the methods in which Fitzgerald allows Nick to give us information about Gatsby, it is clear to from the start see this candidate is competent enough that they can identify the true meaning of the title.

Everything written is valid generally, though some specific details compromise the overall effectiveness, for instance calling Gatsby "childlike". Whilst yes, this may seem a logical assumption, perhaps the word "naive" would suit the analysis better ("naive" was used earlier in the essay, so whilst I recognise this is probably what you meant, other examiners may not so always be sure that you are saying exactly what you want to say, because Gatsby does not have the characteristics of a child at all - quite possible the one-dimensional simplicity of a child who desperately wants something, yes, but this must be made clearer).

One piece of analysis that I've always thought about when considering the title is that the use of the word "Great" recalls many of the stage names for great illusionists of the time. Magic shows and magicians were the dominant breed of live entertainers at the time and were renowned for conjuring grand, elaborate tricks to fool the eyes of thousands of baying onlookers, but were often very unprofessional and cheating behind their extravagant appearance and stage presence. And so is it possible that Fitzgerald is drawing comparison between Gatsby's efforts to reinvent himself as a wealthy socialite wearing a veneer of vulgar ostentation and the same misleading guise worn by magicians and illusionists of the time?

The Quality of Written Communication is very good; only very minor errors are made as a result of perhaps not re-checking as rigorously as is possible, but no matter as the clarity of the essay's analysis is not compromised. The spelling, grammar and punctuation are all acceptable and show a candidate who writes with flair and confidence when analysing literature.