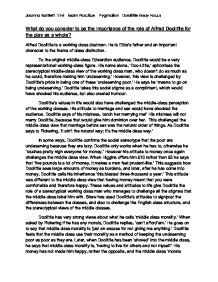 What is the Importance of Alfred Doolittle to Shaw's 'Pygmalion?'

What do you consider to be the importance of the role of Alfred Doolittle for the play as a whole? Alfred Doolittle is a working class dustman. He is Eliza's father and an important character to the theme of class distinction. To the original middle-class Edwardian audience, Doolittle would be a very representational working-class figure. His name alone, 'Doo-Little,' epitomises the stereotypical middle-class view of the working class man, who doesn't do as much as he could, therefore making him 'undeserving.' However, this view is challenged by Doolittle's pride in being one of these 'undeserving poor.' He says he 'means to go on being undeserving.' Doolittle takes this social stigma as a compliment, which would have shocked his audience, but also created humour. Doolittle's values in life would also have challenged the middle-class perception of the working classes. His attitude to marriage and s*x would have shocked the audience. Doolittle says of his mistress, 'catch her marrying me!' His mistress will not marry Doolittle, because that would give him dominion over her. ...read more.

This is important to the play because it provides a conflict to Eliza's opinion that the difference between the two classes is not 'how they speak, but how they are treated.' Finally, Doolittle is a source of humour in the play. His values and attitudes create a paradoxical humour, because they are the polar opposite to what the middle classes would expect a working class man to think. His juxtaposition of ideas 'I want a bit of amusement, 'cause I'm a thinking man,' also has this effect. His essential confidence and cheerfulness also creates a focus of humour. This humour is important to the play, because, essentially, Pygmalion is a romantic comedy. Alfred Doolittle's role represents the working class man; however it also challenges the stereotypes that the middle class assumed about the working class. He acts as a signpost for class distinction, as he is also a foil for Higgins' character. These functions are important to Pygmalion as a whole, because they allow Shaw to further explore the idea of class distinction, and continue to challenge the English middle class views. ?? ?? ?? ?? Joanna Bartlett 11vi Exam Practice Pygmalion Doolittle Essay Focus ...read more.

This is an excellent analytical essay that focuses on the question, ranges around the play and considers the contextual factors that influenced Shaw's writing and the way the play would have been received by audiences of the time. To further strengthen the points more direct reference to the text should be included; links between the different Acts in which Doolittle appears could be explored to identify specific differences and similarities of the character before he has money and after he has received it.