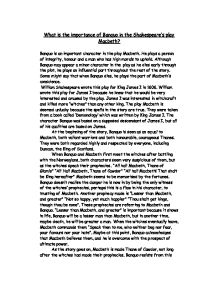 What is the importance of Banquo in Shakespeare's play Macbeth?

What is the importance of Banquo in the Shakespeare's play Macbeth? Banquo is an important character in the play Macbeth. He plays a person of integrity, honour and a man who has high morals to uphold. Although Banquo may appear a minor character in the play as he dies early through the plot, he plays an influential part throughout the rest of the story. Some might say that when Banquo dies, he plays the part of Macbeth's conscience. William Shakespeare wrote this play for King James I in 1606. William wrote this play for James I because he knew that he would be very interested and amused by the play. James I was interested in witchcraft and killed more "witches" than any other king. The play Macbeth is deemed unlucky because the spells in the story are true. They were taken from a book called 'Demonology' which was written by King James I. The character Banquo was based on a supposed descendant of James I, but all of his qualities are based on James. At the beginning of the story, Banquo is seen as an equal to Macbeth, both valiant warriors and both honourable, courageous Thanes. ...read more.

At first he is not in favour of doing the deed to someone so honourable as King Duncan, but Lady Macbeth convinces him it is the right thing to do if he is to fulfil his ambitions. Once he kills Duncan, he frames the guards outside Duncan's quarters, and he even kills them himself in front of everyone to make the illusion that he is innocent. This shows he will even risk lives of other people to cover himself up. When all of the people find out about Duncan's death, Banquo's suspicion grows even stronger, how can the witches speak true? Banquo's suspicion is shown in the following quote "Thou hast it now: King, Cawdor, Glamis, all what the weird women promis'd; and I fear, Thou play'dst most foully for't" This quote shows that Banquo is now suspicious of Macbeth, suspicious that the prophecies have not come true on their own, the have accumulated with the help of Macbeth. Even though Banquo knows about the witches, he doesn't tell anybody. There could be a number of reasons for this, one would be he is afraid of association with the witches, and if he told anyone, they may think he is crazy. ...read more.

This sends Macbeth into hysterics, he seems overcome by the sight of Banquo, but is it really Banquo? Or Macbeth's guilty conscience? Towards the end of the story, Macbeth finds out that there are more prophecies, he cannot be killed by a man born of woman, and his reign will end when the wood of Dunsinane Hill comes towards him. After hearing this Macbeth feels immortal, unbeatable, as he has not looked far enough into the prophecies, this will bring the end of him. Firstly Macduff arrives to bring his reign to an end, as a shield, his army cut down the trees of Dunsinane and used them as a disguise. When Macbeth saw this, he froze, the prophecies were once again correct, his reign will end when Dunsisnane comes to him. But never the less, Macbeth is prepared to defend himself. In the final fight scene, Macbeth fights with Macduff, feeling immortal to the prophecies, he does not realise how Macduff was born. He was born of caesarean, and not born of woman. Now knowing this, Macbeth's ambitions are destroyed, and he is killed by Macduff. The major part of this is that Banquo has the 'last laugh' as he is presented as the hero whilst Macbeth is shown as the villainous man he was. ...read more.

This writer has referred to the text in some detail and has put quotes in context. At times they have commented on language but I would have liked more of this.