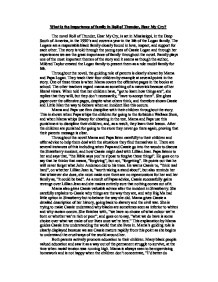 What is the importance of family in Roll of Thunder, Hear My Cry?

What is the importance of family in Roll of Thunder, Hear My Cry? The novel Roll of Thunder, Hear My Cry, is set in Mississippi, in the Deep South of America, in the 1930's and covers a year in the life of the Logan family. The Logans are a respectable black family closely bound in love, respect, and support for each other. The story is told through the young eyes of Cassie Logan and through her experiences we see the great importance of family throughout the novel. Family plays one of the most important themes of the story and it seems as though the author, Mildred Taylor created the Logan family to present them as a role model family for life. Throughout the novel, the guiding role of parents is clearly shown by Mama and Papa Logan. They teach their four children by example at several points in the story. One of these times is when Mama covers the offensive pages in the books at school. The other teachers regard mama as something of a maverick because of her liberal views. When told that her children have, "got to learn how things are", she replies that they will, but they don't necessarily, "have to accept them". ...read more.

Big Ma explains the history of the much-loved land to Cassie, keeping the memories alive. This traditional story telling is important to the family and it always helps the children to learn and understand their history, and the reason why the land means so much to their family. Although Mr Morrison is not a family member, he soon gets treated and valued as one of the family, again adding to the stable environment. He acts as the family's guardian, also guiding the children, especially Stacey into the correct behaviour. This is shown after the fight at the Wallace store between Stacey and T.J. Mr Morrison intervenes and earns Stacey's respect by saying that he will, "leave it", up to Stacey to tell his mother what happened. Mr Morrison gives Stacey responsibility for himself and as a result Stacey noticeably matures. The Logan children love and respect their parents. This response shows just how much Mama and Papa are valued and how their guidance and love has an important effect upon their children. Cassie displays this love for her mother when helping her to dress for church. She says that she, "loved to help Mama dress", and goes on to say affectionately that, "she always smelled of sunshine and soap." ...read more.

Lillian Jean is an example of how unthinking racial prejudice and intolerance can be passed on by parents to their children. The Wallace's are, as a family also r****t and violent. They are involved in the tragic Berry burning and the brutal attack on Papa, Stacey and Mr Morrison. Harlan Granger's families aren't seen in the novel, but the influence of his grandmother is made clear. Mr Jamison says that, "Harlan's always lived in the past", and goes on to say that, "his grandmother filled him with all kinds of tales about the glory of the south before the war." This explains why Harlan Granger has such cold southern values; he learned it from his grandmother. This is yet another example of the powerful influence parents and elders have on their children from one generation to the next. Mr Jamison and his wife are a rare positive image of a white family, discussing and agreeing on all important issues that affect them. They, as a family represent a hope for a more tolerant society in the future. Mr Jamison shares the same respect for his family that the Logan family shares. He tells Papa that he and his wife talked about backing the loan in Vicksburg and, "discussed it fully", with each other. ...read more.