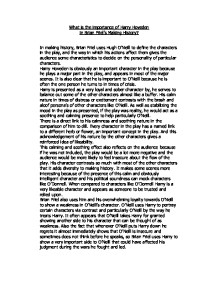 What is the importance of Harry Hoveden

What is the importance of Harry Hoveden in Brian Friel's Making History? In making history, Brian Friel uses Hugh O'Neill to define the characters in the play, and the way in which his actions affect them gives the audience some characteristics to decide on the personality of particular characters. Harry Hoveden is obviously an important character in the play because he plays a major part in the play, and appears in most of the major scenes. It is also clear that he is important to O'Neill because he is often the one person he turns to in times of crisis. ...read more.

Every character in the play has a named link to a different herb or flower, an important concept in the play. And this acknowledgement of his nature by the other characters gives a reinforced idea of likeability. This calming and soothing effect also reflects on the audience because if he was not included, the play would be a lot more negative and the audience would be more likely to feel insecure about the flow of the play. His character contrasts so much with most of the other characters that it adds diversity to making history. It makes some scenes more interesting because of the presence of this calm and obviously intelligent character and his political soundness can mock characters like O'Donnell. ...read more.

Also the fact that whenever O'Neill puts Harry down he regrets it almost immediately shows that O'Neill is insecure and sometimes does not think before he speaks, so Brian Friel uses Harry to show a very important side to O'Neill that could have affected his judgment during the wars he fought and led. Harry is also an expositional character, and Brian uses him to expose different parts of the storyline as well as his own past and other characters past's. For example Harry is the character that introduces O'Neill's English background, and the fact that it was Harry and not O'Neill that exposed this shows a certain integrity about Harry and a lack of it in his 'master' O'Neill. ...read more.