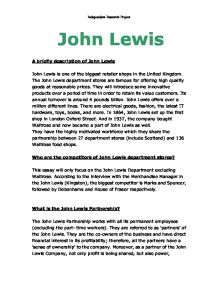 What is the John Lewis Partnership?

John Lewis A briefly description of John Lewis John Lewis is one of the biggest retailer shops in the United Kingdom. The John Lewis department stores are famous for offering high quality goods at reasonable prices. They will introduce some innovative products over a period of time in order to retain its value customers. Its annual turnover is around 4 pounds billion. John Lewis offers over a million different lines. There are electrical goods, fashion, the latest IT hardware, toys, books, and more. In 1864, John Lewis set up the first shop in London Oxford Street. And in 1937, the company bought Waitrose and now became a part of John Lewis as well. They have the highly motivated workforce which they share the partnership between 27 department stores (include Scotland) and 136 Waitrose food shops. Who are the competitors of John Lewis department stores? This essay will only focus on the John Lewis Department excluding Waitrose. According to the interview with the Merchandise Manager in the John Lewis (Kingston), the biggest competitor is Marks and Spencer, followed by Debenhams and House of Fraser respectively. What is the John Lewis Partnership? The John Lewis Partnership works with all its permanent employees (excluding the part- time workers). They are referred to as 'partners' of the John Lewis. They are the co-owners of the business and have direct financial interest in its profitability; therefore, all the partners have a 'sense of ownership' to the company. Moreover, as a partner of the John Lewis Company, not only profit is being shared, but also power, information, knowledge and the future, therefore, all employees (partners) ...read more.

This policy even applies when other competitors are during the sale periods. According to Kotler (1996), 'An advantage over competitors is gained by offering consumers greater value, either through lower prices or by providing more benefits than justify higher prices'. It believes that John Lewis is the first company that carries out the 'Never Knowingly Undersold' policy in the United Kingdom in order to screen out the other competitors. That's the main reason why they can retain the existing customers as well as the reputation, besides; this can also enhance customers' confidence towards the company. -'Professional advice' The staff of the John Lewis are all professional, they will not 'hard sell' their company's product, instead they will just provide helpful and honest information on the products only because they don't want to dissatisfy their customers. They don't want the customers to go away and thus, they want all customers to come for the second time. -'Excellent shopping environment' The clean shopping environment provided by the John Lewis Company enable the customers to have a comfortable environment when buying things and have no pressure to buy. -'Free extended guarantees on electronic appliances' Besides, in order to enhance the customers' confidence on John Lewis products, they have set up the free extended guarantees on most of the electronic goods such as television, DVD players, personal computers etc. Most of the guarantees are 2 years or more, if your product has breakdown while in normal use, they will arrange the repair free of charge. According to Cole (1996), it suggests that nowadays customers are buying the benefits of a product, rather than the features of the products. ...read more.

According to the interview with the Merchandise Manager of John Lewis department store, the company tends to expand and set up more department stores in the near future. Conclusion Based on the information obtained, it seems that John Lewis Partnership is one of the most successful company in the United Kingdom, its well motivated partners as well as the competitive pricing scheme makes the company has a sales increased by 6% to 2.3.bn this year when compared to the year 2002. It's 'Never Knowingly Undersold' policy and the excellent shopping environment makes John Lewis still be competitive in the market. However, as there are more companies entering the market, John Lewis should diversify its product lines in order to be competitive, it also needs to upgrade the standard of the fashion retailing so as to kick out the competitors like Marks and Spencer in which its fashion retailing is more favourable than John Lewis. Moreover, it seems that the advertisement for John Lewis is not enough, in order to maintain the market share and increase the reputation; it suggests that John Lewis should put more emphasis on advertising, or it can use sponsorship like Vodafone sponsor David Beckham to use its new phones, it can increases the publicity and enhances sales too. Finally, 22 out of 27 John Lewis department stores are opened 6 days a week only, and by the end of the year, 8 of the department stores will be open 7 days a week. It believes that John Lewis should prolong the opening times of all department stores, but not just only 8 stores; since other companies like Bentall Centre, Debenhams, Marks and Spencer, all of them open 7 days a week and late until 9p.m. on Thursday. Independent Research Project ...read more.