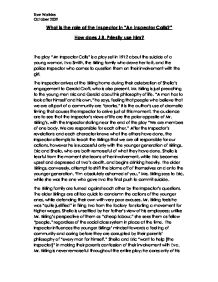 What is the role of the Inspector in An Inspector Calls? How does J.B. Priestly use him?

What is the role of the Inspector in "An Inspector Calls?" How does J.B. Priestly use him? The play "An Inspector Calls" is a play set in 1912 about the suicide of a young woman, Eva Smith, the Birling family who drove her to it, and the police Inspector who comes to question them on their involvement with the girl. The Inspector arrives at the Birling home during their celebration of Sheila's engagement to Gerald Croft, who is also present. Mr. Birling is just preaching to the young men Eric and Gerald about his philosophy of life. "A man has to look after himself and his own," he says, feeling that people who believe that we are all part of a community are "cranks." It is the author's use of dramatic timing that causes the Inspector to arrive just at this moment. The audience are to see that the Inspector's views of life are the polar opposite of Mr. Birling's, with the Inspector stating near the end of the play "We are members of one body. We are responsible for each other." After the Inspector's revelations and each character knows what the others have done, the Inspector attempts to teach the Birlings that we are all responsible for our actions, however he is successful only with the younger generation of Birlings, Eric and Sheila, who are both remorseful of what they have done. ...read more.

He wishes to save mankind from the "fire and blood and anguish," the two World Wars, that will befall them if they continue with the manner they have. The Birling family is used to represent the world as a whole; Mr. & Mrs. Birling representing the older generation, and Eric & Sheila representing the younger generation. The fact that Eric and Sheila learn from their mistakes shows that the younger generation can learn from the mistakes of the older, and avoid them. Sheila points out "you don't seem to have learned anything" to her parents, emphasising the point that the older generation's minds are set and closed, while the younger can be influenced. This is represented by Sheila and Eric staying outside of the rebuilt house. The Inspector represents the process of education, teaching the young Birlings the right way to view their community. He warns the older Birlings that "if [you] will not learn that lesson, [you] will be taught in fire and blood and anguish." This is a very thought-provoking play; the audience is made to think about how they act, and if they need to change their behaviour towards their fellow man. J. B. Priestly uses the Inspector to speak his own personal views. ...read more.

The Inspector stays in this part of the stage. The back is the Birlings' 'house, set in 1912, where the Birlings stay until they come down to the Inspector's level, representing them no longer seeing themselves as superior to the Inspector, possibly to show they are not afraid of him. The collapse of the house after the Inspector's departure represents the Birlings' morals and views being destroyed by the Inspector. However, when Gerald informs them that no girl has died, the house reverts to its former state and Mr. Birling, Mrs. Birling, and Gerald begin collecting their possessions, and return home. Eric and Sheila stay outside. This is to emphasise that they cannot return to their old ways like the rest of the family after they know what they have done. The Inspector's identity of a time-traveller is supported by the appearance of a crowd of characters all dressed in 1940's clothes. They stare at what is happening, never moving, never speaking. These "silent witnesses" represent the people of the future who look back on past events and judge. The Inspector's actions could represent what we would all like to do: go into the past and try to prevent the horrible events of history from happening. ?? ?? ?? ?? Tom Watkins October 2009 ...read more.