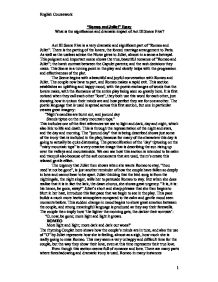 What is the significance and dramatic impact of Act III Scene Five?

"Romeo and Juliet" Essay What is the significance and dramatic impact of Act III Scene Five? Act III Scene Five is a very dramatic and significant part of "Romeo and Juliet". There is the parting of the lovers, the forced marriage arrangement to Paris. As well as the useless advice the Nurse gives to Juliet, almost in a sense a betrayal. This poignant and important scene shows the true, beautiful romance of "Romeo and Juliet"; the harsh contrast between the Capulet parents; and the rash decisions they make. This Scene is a turning point in the play and slowly helps with the progression and effectiveness of the plot. The Scene begins with a beautiful and joyful conversation with Romeo and Juliet. The couple now have to part, and Romeo makes a rapid exit. This section establishes an uplifting and happy mood, with the poetic exchanges of words that the lovers make, with the Romance of the entire play being seen so greatly here. It is first noticed when they call each other "love", they both use this word for each other, just showing how in unison their minds are and how perfect they are for one another. The poetic language that is used is spread across this first section, but one in particular creates great imagery: "Night's candles are burnt out, and jocund day Stands tiptoe on the misty mountain tops." ...read more.

Comparing Juliet to something as strong and valuable as a ship, "a bark", is just showing how he sees her. The soft calm sounds that are shown through the alliteration also convey Capulet as quite a cool calm character. These sounds and the metaphors in this piece conjure up beautiful descriptive imagery that creates a tranquil picture for the audience, a great contrast to what is about to be seen. When Capulet then asks if Juliet has accepted the marriage to Paris, Lady Capulet replies: "Ay, sir; but she will none, she gives you thanks. I would the fool were married to her grave!" This extremely ironic phrase from Lady Capulet gives the idea that Juliet is marrying death, which in a way is true. This dramatic irony that is constantly seen through the play has an immense effect on the audience, as it seems to tempt fate because the audience know what is going to happen. Therefore all the hints and ironic clues that are dropped during the play make the realisation and tragedy of the conclusion even more heart wrenching. Once Capulet receives the news he unleashes a number of insults towards Juliet that shock and stammer the audience. ...read more.

Juliet's final soliloquy closes the scene well, but also leaves fear and the thoughts of the destined tragedy in the minds of the audience: "I'll to the friar, to know his remedy: If all else fail, myself have power to die." Juliet is now saying that if she cannot obtain poison from the friar, she has the will to commit suicide. She believes that without her Romeo, and without the love and care of her family it is not worth living, especially if she is to be wed to someone she does not and never will love. The scene overall is one of the most diverse in the entire play. It features hugely significant and dramatic parts with tense and effective contrasts between mood, character and emotion, which are frankly unreal. This amazing scene impacts greatly on the audience leaving them in despair as they hear countless foreshadowing from the characters and have to prepare for the inevitable tragedy. It is also a significant turning point in the play as it shows the couple properly together for the last time, the fickleness of the nurse, the wild and frightening emotions of Capulet, and the sorrows and fears that Juliet has. I feel that this scene is a very well constructed and effective part of the play. English Coursework 1 ...read more.