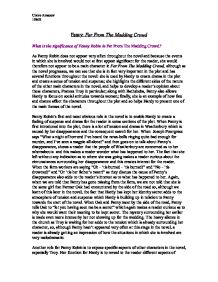 What is the significance of Fanny Robin in Far From The Madding Crowd?

Essay: Far From The Madding Crowd What is the significance of Fanny Robin in Far From The Madding Crowd? As Fanny Robin does not appear very often throughout the novel and because the events in which she is involved would not at first appear significant for the reader, she would therefore not appear to be a main character in Far From The Madding Crowd, although as the novel progresses, we can see that she is in fact very important in the plot and has several functions throughout the novel: she is used by Hardy to create drama in the plot and create a sense of tension and suspense; she highlights the different sides of the nature of the other main characters in the novel, and helps to develop a reader's opinion about these characters, Frances Troy in particular; along with Bathsheba, Fanny also allows Hardy to focus on social attitudes towards women; finally, she is an example of how fate and chance affect the characters throughout the plot and so helps Hardy to present one of the main themes of the novel. Fanny Robin's first and most obvious role in the novel is to enable Hardy to create a feeling of suspense and drama for the reader in some sections of the plot. When Fanny is first introduced into the plot, there is a lot of tension and drama in Weatherbury which is caused by her disappearance and the consequent search for her. When Joseph Poorgrass says "What a night of horrors! I've heard the news-bells ringing quite bad enough for murder, and I've seen a magpie all alone!" and then goes on to talk about Fanny's disappearance, shows a reader that the people of Weatherbury are concerned as to her whereabouts and this makes a reader wonder what has happened to her. The fact that she left without any indication as to where she was going makes a reader curious about the circumstances surrounding her disappearance and this creates interest for the reader. ...read more.

This shows how he doesn't think of the consequences of his words. Fanny's disastrous relationship with Troy could have been used to foreshadow the consequences of his relationship with Bathsheba. Similarly, the fact that in the few times that Fanny appears in the novel, she is in a gloomy and dreary atmosphere "If anything could be darker than the sky, it was the wall, and if anything could be gloomier than the wall it was the river beneath." Her appearance in these depressing environments could also be foreshadowing the situation at her death. When Troy and Bathsheba see Fanny on Casterbridge Highway, were are told that that "Bathsheba could see plainly enough to discern the extreme poverty of the woman's garb, and the sadness of her face." If Troy had really loved Fanny as he said he did, she would not have been in that condition. However, it is this meeting that is ultimately the cause of the collapse of Troy's and Bathsheba's marriage. When Troy stops to talk to Fanny but tells Bathsheba to carry on in the gig we can see that they are growing apart. It is Fanny's death and Troy's realisation that he did love her in retrospect that finally destroys the already deteriorating marriage between Troy and Bathsheba. This meeting allows Hardy to highlight the irony of her role: she is used to highlight Troy's character, and highlight this as he is in a relationship with Bathsheba until Bathsheba herself realises Troy's true nature. Once her role has been fulfilled for Hardy, he kills her off. This same meeting also highlights Troy's cowardice and shallowness, and is a turning point in the novel, as if he had at this point admitted to Bathsheba his involvement with Fanny or even that this woman was Fanny Robin, Bathsheba's missing servant, then Fanny's death and the subsequent events could have been avoided. ...read more.

Throughout the novel, Fanny is present as a victim of fate and circumstance. Her life is controlled by fate and chance and this shows how her function for Hardy extends beyond the plot and the development of other characters. Arguably, it could be said that the fact that Fanny did not go to the right church was another turning point in the novel, for had she been to the right church, she and Troy would have married and we can assume that Troy's marriage to Bathsheba would not have taken place so all the resulting events which took place such as Troy's death and Boldwood's prison sentence would therefore not have occurred. This shows that fate plays a big part for both theme and also in the plot throughout the novel. However, the use of fate has been used subtly so that the plot could seem more believable to the reader, for example, when Fanny mixes up the name of the churches, it is only later in the novel that we learn why this happens. Another example of fate in the novel is when Bathsheba and Troy see Fanny by the side of the road. If this event had not occurred, other events, such as the immediate collapse of Troy's and Bathsheba's marriage would not have occurred. When first reading the novel, Fanny Robin does not appear important to the contribution of building up of character, developing themes or highlighting certain aspects of the natures of other characters in the novel, but when analysed and linked to sections and events later in the novel, her significance becomes evident. If Fanny were not in the novel, it would be more difficult for Hardy to emphasise the prejudices against women at the time, as well as creating tension and suspense in the plot and highlighting the true nature of other characters, especially Troy. Therefore, a reader would not be as aware of the irony surrounding her role and so would not realise how implicitly her presence in the novel aided Hardy to highlight all these aspects. Claire Ainscow 10MR ...read more.