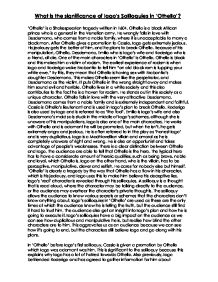 What is the significance of Iagos Soliloquies in Othello?

What is the significance of Iago's Soliloquies in 'Othello'? 'Othello' is a Shakespearian tragedy written in 1604. Othello is a black African prince who is a general in the Venetian army. He wrongly falls in love with Desdemona, who comes from a noble family, where it is unacceptable to marry a black man. After Othello gives a promotion to Cassio, Iago gets extremely jealous. His jealousy gets the better of him, and he plans to break Othello. Because of his manipulation, Othello, Desdemona, Emilia who is Iago's wife and Roderigo who is a friend, all die. One of the main characters in 'Othello' is Othello. Othello is black and this makes him a victim of r****m. The earliest experience of r****m is when Iago and Roderigo wake Brabantio to tell him "an old black ram is tupping your white ewe." By this, they mean that Othello is having s*x with Brabantio's daughter Desdemona. This makes Othello seem like the perpetrator, and Desdemona as the victim. It puts Othello in the wrong straight away and makes him sound evil and horrible. Othello lives in a white society and this also contributes to the fact he is a haven for r****m. He stands out in this society as a unique character. Othello falls in love with the very attractive Desdemona. Desdemona comes from a noble family and is extremely independent and faithful. Cassio is Othello's lieutenant and is used in Iago's plan to break Othello. Roderigo is also used by Iago and is referred to as 'the fool'. Emilia is Iago's wife and also Desdemona's maid so is stuck in the middle of Iago's schemes, although she is unaware of his manipulations. Iago is also one of the main characters. He works with Othello and is adamant he will be promoted, but when he isn't, he gets extremely angry and jealous. He is often referred to in the play as 'honest Iago' and is very duplicitous. ...read more.

Someone like Cassio. As Roderigo is in love with Desdemona, Iago says that he should start a fight with Cassio to show he is the better man. This is significant because in the soliloquy, he explains his actions and his secret l**t for Desdemona. The purpose of Iago's second soliloquy is to inform the audience of how his plan has developed. It takes the plan further on, and shows us that the plan if more structured. At the beginning of the soliloquy, Iago accuses Cassio of loving Desdemona. "That Cassio loves her, I do well believe it." There could easily be some truth to this, as Desdemona is a s******y attractive character and many men fall for her. But I don't believe that Cassio does love her, as he is close to Othello and has a mistress, Bianca. Iago then goes on to say "That she loves him, 'tis apt and of great credit". By this, Iago means that is it likely and believable that Desdemona loves Cassio too. Iago could be saying this out of jealousy because he may love Desdemona, or he may be saying it out of spite towards Othello. I don't agree with this statement though, because Desdemona is so in love with Othello that she wouldn't be interested in anyone else. Next, Iago talks about Othello. "Is of a constant, loving, noble nature," Iago is echoing his thoughts from soliloquy one where he described Othello as being "of a free and open nature." The effect of repeating this opinion is that it reinforces the idea of Iago's homosexuality. This may not be the case, but the statement makes the audience unsure of whether Iago actually hates Othello, or if he is covering up his true feelings. Iago then goes on to say "Now, I do love her too;" In this, he is talking about Desdemona and how he does love her too, but he then says "Not out of absolute l**t". ...read more.

The last three lines of Iago's third soliloquy are "So will I turn her virtue into pitch, and out of her own goodness make the net that shall enmesh them all." Virtue means goodness, which represents Desdemona's reputation as it is perfect. Pitch means something filthy, black tar. Iago is going to destroy Desdemona's reputation with Othello mainly, but also with everyone else. By using Desdemona's good nature, not just against herself, but everyone, he is going to trap them all. In this soliloquy, Iago is encouraged by his success of his plan so far, he becomes arrogant and blames the success, not on his villainy, but on the weakness of others. He has successfully go rid of Cassio, dismissed, and so concentrates on 'destroying' Desdemona, and Othello through her. In this soliloquy, Iago's negative opinion of women, his misogyny, comes out. Iago is an epitome of evil. Desdemona epitomises goodness and so evil will use goodness to destroy everyone. I think with this soliloquy, Shakespeare's main intentions were to show Iago's final plan, and to show how Desdemona comes into it. I think Shakespeare intended to show the audience how Iago doesn't care that he is hurting people. I think he also wanted to show the audience Iago's 'kind of' confession. The impact this has on the audience is it shows us Iago's true character and how he knows what he is doing, but doesn't care about who it might hurt. It also makes us feel sorry for Desdemona as the next part of his plan is based mainly on her, and he uses her good qualities against her. The soliloquy has changed since the first one in the way that part of Iago's plan is complete, so in soliloquy three, he concentrates on Desdemona and how she comes into his plan. Also, Iago is no longer afraid, if he ever was, about what he says about the characters. He seems more open to voice his opinions on them, no matter how harsh. ...read more.

The essay engages at an okay level with the question, but in my opinion this essay is much too long. It is clear from the lengthy introduction that this essay is unable to stay cogent, giving unnecessary background information about ...

The essay engages at an okay level with the question, but in my opinion this essay is much too long. It is clear from the lengthy introduction that this essay is unable to stay cogent, giving unnecessary background information about Othello's past and when the play was written. I had an almost identical task set for A-Level coursework, and I was able to submit a full marks piece with 1650 words. There is no need for more than that, and I'd like to note that submitting lengthy essays won't hide the lack of analysis. I wanted to see the significance command word in the task really explored, yet I was disappointed to see the essay simply tells what happens in each soliloquy. I would be exploring how Iago's soliloquies are key in setting Othello's tragedy in motion.

Due to the overly long paragraphs, it is difficult to pinpoint any solid analysis. This is a great example of why being concise matters, as the essay tends to waffle about the significance of Iago's soliloquies on the plot. I would like to note that doing so will gain you little credit, and the question is prompting for significance on the dramatic effect, thus the audience response should be explored. Language and imagery are analysed, but I would've preferred to have seen more cohesion, showing common themes such as satanic imagery or poisonous imagery. It is key to note that this essay writes as if Iago is real "what Iago means" which is an awful style. You must show awareness that the play is a construction of Shakespeare's, and by doing this you'll naturally go on to explain why he has chosen certain techniques. There is a decent awareness of audience response, but there is no clear significance evaluated through the essay. I would've liked to have seen some context woven in also, maybe making reference to Elizabethan audiences fearing the devil, to which Iago refers to often.

This essay is structured horrifically due to its length. Spelling, punctuation and grammar are fine, but unfortunately the sheer length of paragraphs detracts from this. There is no clear introduction and conclusion which suggests this is more of a memory dump of analysis, rather than focusing on the question itself and fully engaging with the task. Rather than analysing each soliloquy in turn, I would advise picking out the effects of the soliloquies as a group on Othello's tragedy and the dramatic effect.