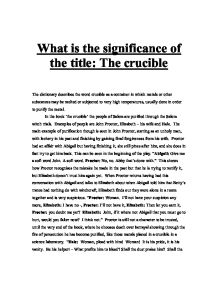 What is the significance of the title: The crucible?

What is the significance of the title: The crucible The dictionary describes the word crucible as a container in which metals or other substances may be melted or subjected to very high temperatures, usually done in order to purify the metal. In the book 'the crucible' the people of Salem are purified through the Salem witch trials. Examples of people are John Proctor, Elizabeth - his wife and Hale. The main example of purification though is seen in John Proctor, starting as an unholy man, with lechery in his past and finishing by gaining final forgiveness from his wife. Proctor had an affair with Abigail but having finishing it, she still pines after him, and she does in fact try to get him back. This can be seen in the beginning of the play. "Abigail: Give me a soft word John. A soft word. Proctor: No, no. Abby that's done with." This shows how Proctor recognises the mistake he made in the past but that he is trying to rectify it, but Elizabeth doesn't trust him again yet. When Proctor returns having had this conversation with Abigail and talks to Elizabeth about when Abigail told him that Betty's trance had nothing do with witchcraft, Elizabeth finds out they were alone in a room together and is very suspicious. ...read more.

Because I lie and sign myself to lies! Because I am not worth the dust on the feet of them that hang! How may I live without my name? I have given you my soul; leave me my name!" To say such things shows such a bravery and Elizabeth recognises this and all she can to but to take away his pride and courage is to let him go. Due to these events Elizabeth is also purified of her cynical and untrusting thoughts of Proctor and she finally at the end of his life forgives him, whether Proctor dies with this knowledge is unlikely, although it is nice to think he died peacefully. That Proctor probably didn't know this must have greatly troubled her, the knowledge that she had no opportunity to give a final forgiveness, a final goodbye must have been difficult for her. Her soul however has been purified from the suspicion she felt towards Proctor and his attitude towards Abigail. Hale has been purified of his original attitude on coming to Salem, he arrives in Salem and instantly tries to blame the situation on witchcraft and starts the naming of people who have been seen with the devil. ...read more.

The book is on the subject of witchcraft and something like that is supernatural and not scientifically explained. A crucible is a instrument used in science consequently it would be on a completely separate subject. Arthur Miller didn't believe in witches therefore it is thought that maybe the title of the play didn't have all mentioned significance and was simply to take away the paranormal side to the play, by having a scientific title. It is nonetheless, unlikely, that his choice of title was as unconnected as that. It is more likely though that he used this reason partly for choosing his title but mainly to do with the purification that the use of a crucible performs. The crucible therefore is not simply a metaphor for the pressure to conform for many people - as in a scientific crucible the metal is condensed - and made to conform to the ideal moral society - or in the case of metals the ideal pure form of the metal is desired, it is a case of many theories all equally possible, for the reach towards science to tone down the mystical and uncanny nature of the Salem witch hunt and of sought purity, regularity and forgiveness. In the final moments of Proctors life; Elizabeth: He have his goodness now. God forbid I take it from him!" ...read more.