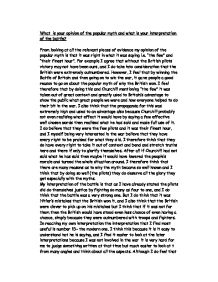 What is your opinion of the popular myth and what is your interpretation of the battle? From looking at all the relevant pieces of evidence my opinion of the popular myth is that it was right in what it was saying i.e. "the few" and "their finest hour". For example I agree that without the British pilots victory may not have been ours, and I do take into consideration that the British were extremely outnumbered. However, I feel that by winning the Battle of Britain and then going on to win the war, it gave people a good reason to go on about the popular myth of why the British won. I feel therefore that by doing this and Churchill mentioning "the few" it was taken out of great context and greatly used ...read more.

I do believe that they were the few pilots and it was their finest hour, and I myself being very interested in the war believe that they have every right to be praised for what they did. I therefore think that they do have every right to take it out of context and bend and stretch truths here and there if only to glorify themselves. After all if Churchill had not said what he has said then maybe it would have lowered the people's morale and turned the whole situation around. I therefore think that there are many reasons as to why the myth became so well known and I think that by doing so well (the pilots) ...read more.

In reaching my own interpretation the interpretation that I find most useful is number 15- the modern one. I think this because it is it easy to understand hat he is saying, and I find it easier to look at the later interpretations because I was not involved in the war it is very hard for me to judge something written at that time but much easier to look at t from many angles and think about all the aspects. Although I do feel that I can get a lot more out of the earlier interpretations in the aspect of analysing them from looking at an outside point of view. In conclusion to this, my interpretation of the Battle is that is the Germans mistakes were wisely picked up upon to result in a hard earned victory. ...read more.