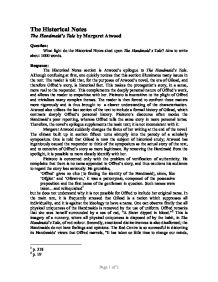 What light do the Historical Notes shed upon The Handmaid's Tale?

The Historical Notes The Handmaid's Tale by Margaret Atwood Question: What light do the Historical Notes shed upon The Handmaid's Tale? Aim to write about 1000 words. Response: The Historical Notes section is Atwood's epilogue to The Handmaid's Tale. Although confusing at first, one quickly notices that this section illuminates many issues in the text. The reader is told that, for the purposes of Atwood's novel, the era of Gilead, and therefore Offred's story, is historical fact. This makes the protagonist's story, in a sense, more real to the responder. This complements the deeply personal nature of Offred's work, and allows the reader to empathise with her. Pieixoto is insensitive to the plight of Offred and trivialises many complex themes. The reader is then forced to confront these matters more rigorously and is thus brought to a clearer understanding of the characterisation. ...read more.

He complains that there is no name appended to Offred's story, and thus cautions his audience to regard the story less seriously. He grumbles, 'Offred' gives no clue [to finding the identity of the Handmaid], since, like 'Ofglen' and 'Ofwarren,' it was a patronymic, composed of the possessive preposition and the first name of the gentleman in question. Such names were taken...and relinquished1 but he does not understand why it is not possible for Offred to include her original name. In the main text, it is frequently stressed that Gilead is a nation which suppresses all individuality, and it is against the ideology to have a name. One can observe firstly that all physical uniqueness of the Handmaids is removed by the use of uniform. Offred remarks that she sees herself surrounded by a sea of red, "A Sister dipped in blood."2 This is imagery of a nunnery, where all physical uniqueness is disposed of by the habit, in The Handmaid's Tale, of red colour. ...read more.

This name has an aura around it, like an amulet, some charm that's survived from an unimaginably distant past...the name floats there behind my eyes, not quite within reach, shining in the dark.5 This refusal to conform to Gilead's practices is itself a recognition of Offred's individuality. Despite her submission into various demeaning physical acts such as the Ceremony, her thought still betrays her unorthodoxy. After Professor Pieixoto's refusal, or perhaps inability, to acknowledge Offred's identity without a proper name, the reader is forced to contemplate more of these issues, and is brought to a clearer understanding of them. Pieixoto's indifference to these matters only makes Offred's vivid portrait of life in Gileadean society more evocative, especially on the issue of identity. 1 p. 318 2 p. 19 3 p. 38 4 p. 33 5 p. 94 ?? ?? ?? ?? Page 1 of 2 ...read more.