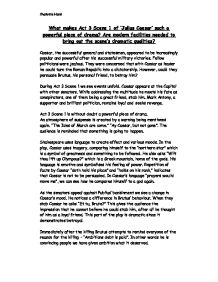 What makes Act 3 Scene 1 of 'Julius Caesar' such a powerful piece of drama? Are modern facilities needed to bring out the scene's dramatic qualities?

What makes Act 3 Scene 1 of 'Julius Caesar' such a powerful piece of drama? Are modern facilities needed to bring out the scene's dramatic qualities? Caesar, the successful general and statesmen, appeared to be increasingly popular and powerful after his successful military victories. Fellow politicians were jealous. They were concerned that with Caesar as leader he could turn the Roman Republic into a dictatorship. However, could they persuade Brutus, his personal friend, to betray him? During Act 3 Scene 1 we see events unfold. Caesar appears at the Capitol with other senators. While addressing the multitude he meets his fate as conspirators, one of them being a great friend, stab him. Mark Antony, a supporter and brilliant politician, remains loyal and seeks revenge. Act 3 Scene 1 is without doubt a powerful piece of drama. An atmosphere of suspense is created by a warning being mentioned again. "The Ides of March are come." "Ay Caesar, but not gone". The audience is reminded that something is going to happen. Shakespeare uses language to create effect and various moods. In the play, Caesar uses imagery, comparing himself to the "northern star" which is a symbol of greatness and something to be followed. ...read more.

He also uses alliteration to highlight his desire for revenge, "ranging for revenge" and "With Ate by his side came hot from h**l". The extent of his feelings is shown by his use of personification with the word "Ate". This is the fanatical goddess of revenge and mischief, banished by the gods to live among men. After the killing, clearly Mark Antony is fearful because he sends his servant to see if Caesar is safe rather than go himself. He pretends to agree with the conspirators "I doubt not of your wisdom. Let each man render me his b****y man." He says "Friends am I with you all, and love you all." However, later alone he is obviously sorry for siding with them "To beg the voice and utterance of my tongue". This is dramatic because it shows Antony siding with the conspirators but once they exit he contradicts himself by wanting revenge. Cassius had shown himself to be a persuasive, conspiring character. He is the one who persuades Brutus to agree to the assassination. He demonstrates panic, "I fear our purpose is discovered", "Cassius or Caesar never shall turn back, for I will slay myself." ...read more.

The theme of Shakespeare's plays contrasted with the Tudor time in which it was staged. At school, the children were taught in great detail about the Romans and Caesar. Therefore, people who saw the plays would have a good knowledge of what happened previous to the start of the play. A great deal of the Romans' culture was similar to theTudors' e.g. they had the same political opinions. The audiences' views would have reflected the themes of the play and people may have related themselves to the characters. This could be a reason why Shakespeare's plays were so successful. In conclusion, I definitely do consider Act 3 Scene 1 of "Julius Caesar" to be a powerful piece of drama. The various themes of jealously, treachery, tragedy, and loyalty are shown in a short section of the play. However, I do believe modern technology can add to the mood and drama of the production. The main reason for this is because I believe music to be a powerful tool to build up emotions. The build up of speed and volume adds to the tension effectively. We are left with a feeling of disgust that Brutus did actually betray Caesar. This point is emphasised as we see another friend remain loyal. Charlotte Hamil ...read more.