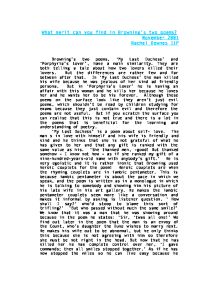 What merit can you find in Browning&amp;#146;s two poems?

What merit can you find in Browning's two poems? November 2001 Rachel Downes 11P Browning's two poems, 'My Last Duchess' and 'Porphyria's Lover', have a main similarity. They are both telling a tale about how two lovers killed their lovers. But the differences are rather few and far between after that. In 'My Last Duchess' the man killed his wife because he was jealous of her kind ad friendly persona. But in 'Porphyria's Lover' he is having an affair with this woman and he kills her because he loves her and he wants her to be his forever. Although these poems on the surface look like they aren't just evil poems, which shouldn't be read by children studying for exams because they just contain evil and therefore the poems are not useful. But if you scratch the surface you can realise that this is not true and there is a lot in the poems that is beneficial for the learning and understanding of poetry. 'My Last Duchess' is a poem about self- love. The man s in love with himself and his wife is friendly and kind and he thinks that she is not grateful of what he has given to her and that any gift is ranked with the same value as his. ...read more.

Robert Browning inserts a horror spectre by using a lot of enjambments, flowing the lines from line to line, so you have to read on to the next line to find out what append and you don't just stop when you get to the end of the line. 'My Last Duchess' is a dramatic monologue that is not really shocking at all. You hear of a desperate and evil man who murders his wife out of pure jealousy. This poem is suitable for anyone because there is so much to learn. It's a useful piece that is a classic piece of poetry writing. Porphyria's Lover it is a lot more shocking. This is because on line 38 - 41 you experience Porphyria's lover killing her. 'And all her hair in one long, yellow string I wound three times her little throat around and strangled her.' The shock is made more intense because earlier on in the poem he tells of how much he cares and loved her and he talked so affectionately about her. On line 6: 'When glided in Porphyria: straight she shut the cold out and the storm and kneeled and made the cheerless grate blaze up and all the cottage warm.' ...read more.

The pattern of ABABB was used. In fact this quite an odd pattern and that is very fitting to the odd poem. There is an almost ballad feel to the rhythm to the poem. Porphyria's Lover is a shocking poem that is also very useful in understanding about certain things about life and also in the ways that poetry can be written and expressed. Both poems do contain a certain shock element but that is not all that the poems contain. People, sometimes, live in very sheltered lives and at the sign of a bit of horror or 'unnatural things' people run a mile and mark the poem as unsuitable for children. But children at some stage need to understand about the unfavourable sides of life and also about good poetry. There are a number of things that you can say that give the poems a bad name but if you scratch the surface you realise that they are beneficial and advantageous. To the eyes of some modern readers the poems aren't shocking at all because there are a number of people that have heard about, read about and maybe even seen material of a revealing nature. When reading and understanding texts one must bear in mind the time and context in which the poems were written. ...read more.