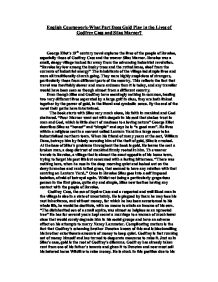 What Part Does Gold Play in the Lives of Godfrey Cass and Silas Marner?

English Coursework-What Part Does Gold Play in the Lives of Godfrey Cass and Silas Marner? George Eliot's 19th century novel explores the lives of the people of Raveloe, especially those of Godfrey Cass and the weaver Silas Marner. Raveloe was a small, sleepy village tucked far away from the advancing industrial revolution. "Raveloe lay low among the bushy trees and the rutted lanes, aloof from the currents of industrial energy" The inhabitants of the village led simple lives and were all traditionally church going. They were highly suspicious of strangers, particularly those from different parts of the country. This reflects the fact that travel was inevitably slower and more arduous than it is today, and any traveller would have been seen as though almost from a different country. Even though Silas and Godfrey have seemingly nothing in common, leading two very different lives separated by a large gulf in class, they are both linked together by the power of gold, in the literal and symbolic sense. By the end of the novel their paths have intertwined. The book starts with Silas very much alone, his faith in mankind and God shattered. "Poor Marner went out with despair in his soul that shakes trust in man and God, which is little short of madness to a loving nature" George Eliot describes Silas as "honest" and "simple" and says he is "a good man". ...read more.

Dunstan walks off unscathed, minus the desperately needed money. Walking home he notices Silas's house unattended and hearing rumours of the weaver's gold enters to search for it. He finds the hidden money and exits, walking off into the night. Marner's life comes crashing down when the gold is taken from him. Some time after first entering Raveloe Eliot establishes Silas's growing love and continued need for gold over a prolonged section of the book, so the reader is fully aware of how deep his requisite for it is. Upon discovering his gold missing Silas cannot quite believe that it is gone, searching again and again for it in it's hiding place under the floorboards "He passed his trembling hand all about the hole, trying to think it possible that his eyes had deceived him" The thought of his precious gold ever disappearing never crossed his mind, as his disbelieving actions show. As he frantically searches every nook and cranny in his home the reader immediately sympathises with his predicament and feels a great deal of pity for Silas, seeing his distress at the loss. His reaction shows how much the gold means to him. He goes to his loom, looking for something to reassure him, to calm him. The moment he accepts the gold has vanished he lets out a terrible, despairing wail, the pain of his past betrayal seeming to resurface in the loss of the gold. ...read more.

He and Nancy are now happily married but are ironically childless after a miscarriage. Believing he would have children with Nancy may have been part of the reason he didn't take Eppie and now he is left with no one to carry on the family name. When a skeleton is found in the drained quarry it is proved to be Dunstan's, along with Silas's money. This pushes Godfrey into some sort of action. He manages to tell Nancy that Eppie is his daughter after the first revelation. They decide on taking Eppie back and set off to Silas's home immediately. Silas has realised that Eppie has enriched his life much more than his gold ever could as he looks at his now returned money. At this point Godfrey and Nancy knock on the cottage door. After carefully building towards the subject of Nancy's parentage Godfrey reveals he is her biological father and that he wishes to take her back, offering her all the money she would ever need. Nancy does not wish to leave Silas, the man who has been a proper father to her. Godfrey cant understand her decision, saying he has a "natural claim" on her as if she were some possession. Godfrey and Nancy leave and it is clear to the reader that while Godfrey has more wealth, Silas is the richer man. George Eliot is saying here that human love is more rewarding and enriches you far more than money and material items, the likes of which Godfrey was offering. ?? ?? ?? ?? ...read more.