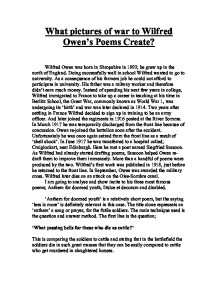 What pictures of war to Wilfred Owen's Poems Create?

What pictures of war to Wilfred Owen's Poems Create? Wilfred Owen was born in Shropshire in 1893; he grew up in the north of England. Doing successfully well in school Wilfred wanted to go to university. As a consequence of his farmers job he could not afford to participate in university. His father was a railway worker and therefore didn't earn much money. Instead of spending his next few years in college, Wilfred immigrated to France to take up a career in teaching at his time in Berlitz School, the Great War, commonly known as World War 1, was undergoing its 'birth' and war was later declared in 1914. Two years after settling in France Wilfred decided to sign up in training to be an army officer. And later joined the regiments in 1916 posted at the River Somme. In March 1917 he was temporarily discharged from the front line because of concussion. Owen re-joined the battalion soon after the accident. Unfortunately he was once again seized from the front line as a result of 'shell shock'. In June 1917 he was transferred to a hospital called; Craiglockart, near Edinburgh. ...read more.

Similes are a way of comparing one thing to another. 'Men marched asleep,' This is a metaphor; it is exaggerating the point that the soldiers were exhausted and were almost falling asleep as they marched. 'Gas! Gas!' This is another example of alliteration; also this line could be classed as onomatopoeia, as the as the sound of the words imitate the sound of the gas. 'Under a green sea I saw him drowning,' This line contains two metaphors. The first is suggesting that the gas is so thick and green that its similar to a green sea. The next is stating that the effect of the horrific gas is one which can make you drown in your own blood. 'In my dreams before my helpless eyes' 'He plunges at me guttering, chocking, drowning' These two lines stand alone in the poem. This is because it is a frightful and nightmarish memory that would have stuck with Owen till his passing day. The memory is obviously catered from a nightmare as you can interpret from the first three words. 'If you could hear at every jolt, the blood' This line is personally talking to the reader and his speech is about his experiences. ...read more.

This is a flashback of the night he signed up and as it indicates he does wonder why he threw away his mobility. 'Tonight he notices women's eyes' 'How they pass though him to strong whole men' This line is creating sympathy for the former soldier, and is stating that women do not look at him the way they used to, but they look at 'whole' men that way. Whole meaning possessing all four limbs. 'How cold and late it is, why don't they come?' 'And put him into bed why don't they come?' This line is the finishing line and ends with a question. The people he is talking could either be; carers, women, who before would have gone to bed with him or even family or friends. This poem is based on one man, and his future of decent and unhappiness, and that it can ruin your life because of one drunken mistake. 'Anthem for doomed youth', 'Dulce et decorum' and 'Disabled' from the talented author Wilfred Owen. His entire poems (post WW1) are against war propaganda. The poems arte trying to shock and mainly inform you of what really goes on in a battlefield. It is stating how no man should die for there country, without their total honer. (1500 words) ...read more.