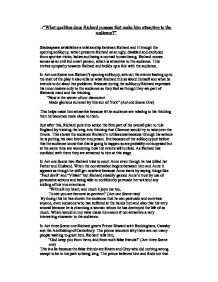 What qualities does Richard possess that make him attractive to the audience?

-1"What qualities does Richard possess that make him attractive to the audience?" Shakespeare establishes a relationship between Richard and I through the opening soliloquy, which presents Richard as an ugly, disabled and excluded from sportive tricks, ladies and being a normal human being. Richard comes across as an evil but smart person, which is attractive to the audience. This invites sympathy towards Richard and builds up a link with the audience. In Act one Scene one Richard's opening soliloquy, sets out the events leading up to the start of the play it also tells us what Richard thinks about himself and what he intends to do about his problems. Because during the soliloquy Richard expresses his inner desires only to the audience so they feel as though they are part of Richards mind and his thinking. "Now is the winter of our discontent Made glorious summer by this sun of York" (Act one Scene One) This helps make him attractive because if the audience are relating to his thinking then he becomes more close to them. Just after this, Richard puts into action the first part of his overall plan to rule England by tricking the king into thinking that Clarence would try to take over the throne. ...read more.

Which would in my view make him seem if not attractive a very interesting character to the audience. In Act three Scene one Richard greets Prince Edward with Buckingham, Catesby and the Archbishop of Canterbury. The prince wonders why there are not many people waiting to greet him, Richard tells him, "God keep you from them, and from such false friends!" (Act three Scene one) This is a lie because the false friends are Rivers and Grey who did nothing wrong except to be in his path to being king. The prince believes him and finds out that is mother and brother are in the sanctuary. How Richard can lie to the prince would defiantly affect the view of Richard from the audiences view because the prince believes anything that Richard says this would make Richard seem attractive as he has lots of cunning and depth. When in Act three Scene four, some of the main characters meet in a council-room in the Tower of London. Richard expresses his acting skills when he condemns Hastings to death for things that he did not do. ...read more.

This could affect the view of the audience towards Richard because he is becoming weaker and perhaps less attractive because of this. In the final few scenes when Richard talks to his army and Richmond to his Richard appears to be very brave even when he hears the news that Derby has deserted him he still goes into the battle. Up to his final words, he is determined not to give up and to kill Richmond, "A horse! A horse! My kingdom for a horse!"(Act five Scene four) This last part of the play and Richards's life I think truly impacts on the whole of the audience because even though he has committed horrific crimes and dreadful deeds the audience may be able to forgive him and admire his courage, which in turn leads to his attractiveness and character. In conclusion, I think that throughout the play Shakespeare presents Richard as an interesting and attractive character. The audience can pick up on this in every part of the play and right up to the end Richard is attractive to the audience and achieves, in my opinion, the goal of an evil and dastardly man combined with someone who is interesting and has motives that are complex and intricate. ...read more.