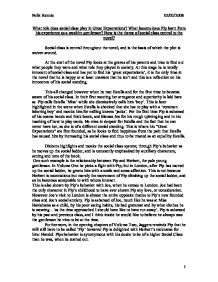 What Role does Social Class play In Great Expectations

What role does social class play in Great Expectations? What lessons does Pip learn from his experience as a wealthy gentleman? How is the theme of social class central to the novel? Social class is central throughout the novel, and is the basis of which the plot is woven around. At the start of the novel Pip looks at the graves of his parents and tries to find out what people they were and what role they played in society. At this stage he is totally innocent of social class and has yet to find his 'great expectations', it is the only time in the novel that he is happy or at least unaware that he isn't and this is a reflection on his innocence of his social standing. This all changed however when he met Estella and for the first time he became aware of his social class. In their first meeting her arrogance and superiority is laid bare as Pip calls Estella 'Miss' while she dismissively calls him 'boy'. This is later highlighted in the scene when Estella is shocked that she has to play with a 'common laboring boy' and mocks him for calling knaves 'jacks'. ...read more.

This is also shown by Pip's behavior with Joe, when he comes to London. Joe had been the only character in Pip's childhood to have ever shown Pip any love, or consideration. However Joe's visit to London is almost the entire opposite thanks to Pip's new founded class and Joe's social anxiety. Pip is ashamed of Joe, much like he was at Miss Havishams as a child, by his poor eating habits, his bad grammar and by what clothes he is wearing - 'as the time approached I should have like to have run away'. Pip is ashamed by his past and previous class, and I think inside he would like to believe he always was the gentleman he tries to be at the time. Furthermore, in the opening chapters of Volume Two, Jaggers reminds Pip that he will still have to be called 'Pip' however Pip is delighted with Herbert's nickname for him: Handel. Pips behavior is synonymous with his desire to be of a higher Social Class than he was, when he started out. In Great Expectations, I think the main idea that Dickens is trying to get across, is that loyalty, affection and conscience are more important than Social Class. ...read more.

When Pip inherited his money he learnt the habits of a gentleman but does not learn the true values of one. This is highlighted in many ways through Herbert's unmistakable air of a gentleman even though he was poor; and the insecurity Pip feels of his social status when he gets the boy who mocked him dismissed. However more importantly is Pip's situation at the end of the book. After he goes into debt he must work his way, through being a clerk of Herbert, out of it. In this way he will become a true gentleman instead of the snobbish impersonation that he was-'the one good thing he did in prosperity, the only thing that endures and bears good fruit.' I think this shows how Pip has grown up, throughout the novel and how he comes to realise that Inner worth is more important than social class. Once ashamed of Joe, he now proudly accepts him into his life. Once horrified of Magwich he now holds his hands and calls him his father. It shows how much he has matured; and how he accepts people by their personality and not by their appearance. ?? ?? ?? ?? Felix Rennie 02/02/2008 1 ...read more.