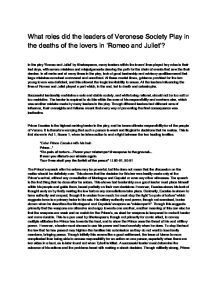 What roles did the leaders of Veronese Society Play in the deaths of the lovers in Romeo and Juliet?

What roles did the leaders of Veronese Society Play in the deaths of the lovers in 'Romeo and Juliet'? In the play 'Romeo and Juliet' by Shakespeare, many leaders within the lovers' lives played key roles in their last days, with severe mistakes and misjudgements clearing the path for the chain of events that saw the their demise. In all ranks and at many times in the play, lack of good leadership and advisory qualities meant that large mistakes remained uncovered and unnoticed. At these crucial times, guidance provided for the two young lovers was deficient, and this allowed the tragic inevitability to ensue. All the leaders influencing the lives of Romeo and Juliet played a part which, in the end, led to death and catastrophe. Successful leadership maintains a safe and stable society, and while being rational, should not be too soft or too restrictive. The leader is required to do this within the area of his responsibility and nowhere else, which was another mistake made by many leaders in the play. Though different leaders had different arcs of influence, their oversights and failures meant that every way of preventing the final consequence was ineffective. Prince Escales is the highest ranking leader in the play, and he bears ultimate responsibility for all the people of Verona. It is therefore worrying that such a person is weak and illogical in decisions that he makes. This is first shown in Act 1, Scene 1, when he takes action to end a fight between the two feuding families. "Enter Prince Escales with his train Prince..." "On pain of torture...Throw your mistemper'd weapons to the ground... If ever you disturb our streets again Your lives shall pay the forfeit of the peace" I.i.80-81, 90-91 The Prince's speech after he enters may be powerful, but this does not mean that the discussion on the matter should be definitely over. ...read more.

Since ordinary women had virtually no rights at that time, it would virtually condemn her to prostitution, though Capulet has not been as cold and obvious to Juliet. This may suggest that he still regards Juliet as a child. However, this scene marks a new stage for Juliet's character in the play, showing she does not feel need to be led by parents anymore. Capulet's changing and inconsistent parenting on Juliet causes her to grow up quickly throughout the play. After her father passionately dishonours her, Juliet becomes much more independent of the advisers she should be closest to. Though there is no doubt Capulet is entirely to blame for his selfishness, the feeling of loss causes Juliet to feel so detached from her family that the advices she takes are totally from other characters. An adolescent teenager needs parents to be comforting but controlling as leaders - a balance which neither Capulet nor Lady Capulet have attempted. The detachment caused provokes Juliet to sacrifice everything for love - however total and true it may be - at a time when her judgement may be impaired by puberty and new-found feelings. It caused her follow a plan which was illogical and bound to fail, leading to the tragic outcome of the lovers' story. Montague is also troubled as a parent of Romeo. However, unlike Capulet, he struggles to control or comfort his son due to his lack of communication and his low self-confidence, from the very beginning of the play. "[Montague]Unless good counsel may the cause remove... I neither know it [the cause of Romeo's troubles], nor can learn of him... [Benvolio]See where he comes. So please you step aside" I.i.136, 138, 150 When mentioning "good counsel," which Romeo obviously needs to comfort him and take him out of his depressed state, Montague is impartial himself, and "unless" has the connotations that someone should do it. ...read more.

Here, the Friar only has "a kind of hope" that the plan would work. This is bad leadership, as he is abusing his position as a trusted and respected man to force this plan, that has a very high chance of total and tragic failure, on Juliet. For a critical, life and death, situation such as this, a solid means to solve the problem must be found and it should not just be left to 'hope' that the Friar's plan is built around. This shows the Friar is more concerned with his own pride and image than anything else, bringing a further conclusion that the marriage itself was foremost for pride of the Friar, and not just good intentions. Words such as "desperate" and "hold" suggest that the Friar's plan is instinctive and hastily made, which it turns out to be. Under stress, Friar Lawrence's leadership does not hold up and recklessness and rashness secure the fate of the lovers. Due to tremendous miscalculation and oversight on the Friar's part, coupled with reckless decision making, the outcome becomes clear and tragic: due to the wedding being shifted one day earlier, death is imminent for the young lovers. Throughout the whole play, each leader, at the point where cool-headedness, calculation, and all those other aforementioned and explained qualities of a successful leader were paramount, failed to deliver. Arguably the largest failure was Friar Lawrence and his ill-fated plan, which was the reason the whole situation collapsed on Romeo and Juliet as it did. In spite of this, however, each of the leaders had a role to play, and if one of them had reacted in a manner a good leader should have done, the deadly sequence could have been stopped. However, no leader truly connected with the people that needed the most help, and therefore seeking love and true happiness the deadly chain took them to their final resting place. ?? ?? ?? ?? ...read more.