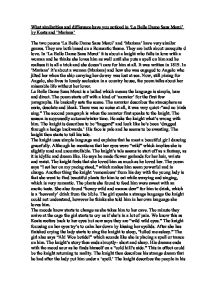 What similarities and difference have you noticed in 'La Belle Dame Sans Merci' by Keats and 'Mariana' The two poems 'La Belle Dame Sans Merci' and 'Mariana' have very similar genres. They are both based on a Romantic theme. They are both about unrequited love. In 'La Belle Dame Sans Merci' it is about a knight who falls in love with a woman and he thinks she loves him as well until she puts a spell on him and he realises it is all a trick and she doesn't care for him at all. It was written in 1819. In 'Mariana' it's about a woman (Mariana) and how she was engaged to Angelo who jilted her when the ship carrying her dowry was lost at sea. Now, still pining for Angelo, she lives in lonely seclusion in a country house, the poem talks about her miserable life without her lover. ...read more.

The knight's tale seems to start off as a fantasy, as it is idyllic and dream like. He says he made flower garlands for her hair, wrists and waist. The knight feels that she loved him as much as he loved her. The poem says "I set her on my pacing steed," which makes him seem powerful and in charge. Another thing the knight 'remembers' from his day with the young lady is that she went to find beautiful plants for him to eat while swaying and singing, which is very romantic. The plants she found to feed him were sweet with an exotic taste. She also found "honey wild and manna dew" for him to drink, which is a 'heavenly' drink from the bible. The girl speaks a strange language the knight could not understand, however he thinks she told him in her own language she loves him. ...read more.

We then think that the girl has sent him a warning and has now trapped him and got him as her slave. When the knight describes his dream he uses the word 'pale' three times, which is repetition and paleness is related to the dead. The last paragraph is a near enough repeat of the first, with the knight describing him on the hill by the lake, as this is where he woke up after his dream. This means the poem has completed a full circle, as has the knight. Everything links back to the beginning of the poem, causing us to think has time stood still like us the knight is unsure. Throughout the poem 'Keats' appeals to our senses. Keats also uses repeated 'O' sounds in the poem like 'alone', 'long', 'moan', 'done' etc. Along with the 'O' sounds there is a lot of alliteration such as 'hair was long, her foot was light. The poem Marinia ...read more.