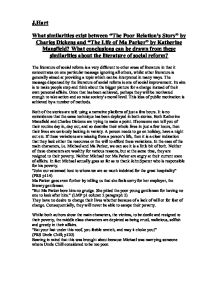 What similarities exist between &quot;The Poor Relation's Story&quot; by Charles Dickens and &quot;The Life of Ma Parker&quot; by Katherine Mansfield? What conclusions can be drawn from these similarities about the literature of social reform?

J.Hart What similarities exist between "The Poor Relation's Story" by Charles Dickens and "The Life of Ma Parker" by Katherine Mansfield? What conclusions can be drawn from these similarities about the literature of social reform? The literature of social reform is a very different to other areas of literature in that it concentrates on one particular message ignoring all others, whilst other literature is generally aimed at providing a topic which can be interpreted in many ways. The message dispensed by the literature of social reform is one of social improvement. Its aim is to make people stop and think about the bigger picture for a change instead of their own personal affairs. Once that has been achieved, perhaps they will be motivated enough to take action and so raise society's moral level. This idea of public motivation is achieved by a number of methods. Both of the stories are told using a narrative platform of just a few hours. It is no coincidence that the same technique has been deployed in both stories. Both Katherine Mansfield and Charles Dickens are trying to make a point. If someone can tell you of their routine day in, day out, and so describe their whole lives in just a few hours, then their lives are seriously lacking in variety. ...read more.

"A rich man, the dirt from whose carriage wheels is often, in these changed times, thrown upon me as she rides by. No, no. She married me. (PRS pp120 - 121) Where the italics show the events of the real world and the underlined words switch to the dream world. "Gran! Gran!, her little grandson stood on her lap in his button boots." (LMP p1 column 1 paragraph 6) Both characters use their thought world as a form of escapism, as people might use novels nowadays, from the harsh realities of their daily routine. They clutch at their dream world because that is the only thing that means anything to them. So empty are their lives that perhaps it is the only thing keeping them going. This is also another way of attaining the reader's sympathy for the characters and so for the poverty that exists in society. So we can see that the literature of social reform plays on people's sense of right and wrong and the stories show poverty as a wrong that must be corrected by the educated, wealthy people in the community, i.e. the people who would be reading the stories. Both stories make use of generic terms to amplify their purpose. The Poor Relation story uses the term "poor relation" and the Life of Ma Parker uses the term "literary gentleman". ...read more.

History has a habit of repeating itself and it seems he will make the same mistakes as Michael and eventually end up in the same predicament. Perhaps he too will have a young cousin to befriend and who will eventually succeed Little Frank. The cycle of poverty will continue. The same situation occurs in LMP. We are told that the baker died of a disease of the lungs and similarly, Lennie too died of a disease of the lungs. Without the money to do something about this disease it will continue throughout the family and perhaps another generation down the line it will kill another family member. The only way to attain this money is to acquire an education but to do that would require money so it is a vicious circle and because of this the cycle of poverty and disease will continue. This is what Charles Dickens and Katherine Mansfield are trying to illustrate with their literature of social reform. At the end of the day, authors such as Charles Dickens and Katherine Mansfield could only do so much. They wrote these stories in the hope that action would result from words. In these stories, they endeavoured to show us, the readers, how things could change, but they could only take the first steps. The people at the time, sitting at home reading these stories must have taken the action necessary to bring about change. They only showed us the door; we had to walk through it. ...read more.