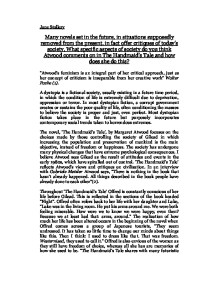 What specific aspects of society do you think Atwood comments on in The Handmaid's Tale and how does she do this?

Jane Stollery Many novels set in the future, in situations supposedly removed from the present, in fact offer critiques of today's society. What specific aspects of society do you think Atwood comments on in The Handmaid's Tale and how does she do this? "Atwood's feminism is an integral part of her critical approach, just as her concept of criticism is inseparable from her creative work" Walter Pache (1). A dystopia is a fictional society, usually existing in a future time period, in which the condition of life is extremely difficult due to deprivation, oppression or terror. In most dystopian fiction, a corrupt government creates or sustains the poor quality of life, often conditioning the masses to believe the society is proper and just, even perfect. Most dystopian fiction takes place in the future but purposely incorporates contemporary social trends taken to horrendous extremes. The novel, 'The Handmaid's Tale', by Margaret Atwood focuses on the choices made by those controlling the society of Gilead in which increasing the population and preservation of mankind is the main objective, instead of freedom or happiness. The society has undergone many physical changes that have extreme psychological consequences. I believe Atwood sees Gilead as the result of attitudes and events in the early 1980s, which have spiralled out of control. 'The Handmaid's Tale' reflects Atwood's views and critiques on civilisation. In an interview with Gabriele Metzler Atwood says, "There is nothing in the book that hasn't already happened. ...read more.

Gilead also holds what is called a "salvaging"; however, one should never be mistaken by its religious name. Ultimately, the "salvaging" is actually the hanging of those who have been caught resisting the regime, therefore not a religious event at all. The word 'salvaging' implies that they are saving someone's soul; however, underneath all the pretence and religious propaganda, it is actually barbaric, "The three bodies hang there, even with the white sacks over their heads looking curiously stretched, like chickens strung up by the necks in a meatshop window; ... wrecked angels." Atwood has used the visual image of a butcher's shop, which enforces the fact that these three women were just seen as pieces of meat. "Wrecked angels" also implies that although angels are seen to be a religious symbol, there is something not quite right about them, they are damaged. The salvaging is also the first part of the novel that Atwood wrote, "With The Handmaid's Tale it began with the hanging scene, which is now quite towards the back of the book" Margaret Atwood (4). The extreme action of the 'salvaging' in the Gilead regime is central to Atwood's critique of fundamentalist societies as it was her starting point; therefore I feel that the novel's central theme is the suppressive regime of Gilead. As well as 'salvaging', the Gilead regime distorts language by giving their actions more appealing names. The 'ceremony' sounds as though it is something holy and sacred and something to be proud of. ...read more.

Lorna Irvine (5). Atwood intentionally related Moira's costume to one of a Playboy Bunny as a critique against the amount of male adult magazines that were around in the eighties. However, she has successfully made the image of Moira ridiculous, therefore this icon is desensitised and made less degrading to women. In the 1980s, Americans were worried that there was too much freedom of choice. Many believed that there had been a loss of family values and were extremely concerned with the rise of p*********y and s******y transmitted diseases. One in particular was AIDs. This disease was discovered in 1981 amongst the h********l community. Many believed that God was punishing h********l people by giving them this incurable virus. This combined with the rising amount of unwanted pregnancies led people to believe that there was a moral decline, which resulted in a social breakdown. As a result, many religious right wing politicians began to put the fear of God into society, one of whom was the President Ronald Reagan. I think Atwood has based the commanders and the people in power in the Gilead regime on these politicians. By taking their views to the extreme, she managed to visualise a dystopian world, which suppressed people's freedom of choice. "Atwood is known as an outspoken defender of humanitarian values, an able and active advocate for woman's rights and for freedom of speech" Nathalie Cooke (6). Therefore I do believe that Atwood's novel 'The Handmaid's Tale' offers a very strong critique of American society in the 1980s. ...read more.