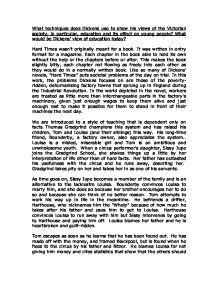 What techniques does Dickens use to show his views of the Victorian society, in particular, education and its effect on young people? What would be Dickens' view of education today?

What techniques does Dickens use to show his views of the Victorian society, in particular, education and its effect on young people? What would be Dickens' view of education today? Hard Times wasn't originally meant for a book. It was written in entry format for a magazine. Each chapter in the book able to hold its own without the help or the chapters before or after. This makes the book slightly bitty, each chapter not flowing as freely into each other as they would do in a normally written book. Like so many of Dickens' novels, "Hard Times" puts societal problems of the day on trial. In this work, the problems Dickens focuses on are those of the poverty-ridden, dehumanising factory towns that sprung up in England during the Industrial Revolution. In the world depicted in the novel, workers are treated as little more than interchangeable parts in the factory's machinery, given just enough wages to keep them alive and just enough rest to make it possible for them to stand in front of their machines the next day. We are introduced to a style of teaching that is dependent only on facts. Thomas Gradgrind champions this system and has raised his children, Tom and Louisa (and their siblings) this way. ...read more.

He particularly uses this writing technique whenever talking about Mr. Gradgrind and his methods of teaching. 'Square' is constantly repeated whilst describing Gradgrind; this may be to give the impression of a perfect and tidy man. But Gradgrind is anything but square, for squares have equal sides and equal angles, all paired up in a fair way to give the impression of a perfect, neat and tidy shape. All of these statements do not pair up in any way equally to his actual personality and being. This doesn't particularly matter because the squared being of his man is used not to be realistic but to create a caricature image of Gradgrind, one that people can ridicule and laugh at but is not necessarily the perfect image of truth. The schoolroom is made out to be a torture chamber of facts and strict education, where writing lines and cleaning the black board would be punishments used every day. You can imagine the room to be made up of four parallel and equal walls, with windows opposite each other and a door central to the room. The schoolroom would basically be a room built on what facts dictate. ...read more.

This certainly proves he is a man of steel and the circus people will not get Sissy over him. In conclusion Dickens novel 'Hard Times' is till relevant and can still be associated with the life of today. The circumstances may not be the same but the thinking and characters in the book are very much up to date. Dickens talks a lot about the children's up-bringing. Commenting on their hardships and how it has affected them later on in life. Children today are still being brought up in much the same way. They may not have to deal with choosing their on paths at such an early age, but they do have to deal with racism, popularity and bullying. Dickens language, settings and times may be quite far off the modern suburban life we live in now but as for the plot and scenario's he couldn't be more exact. Even Dickens views on education are still pretty close to today's curriculum. Many authors like Swift have learnt a great deal from Dickens, you can see how his early texts have been newly interpreted and changed to suit new authors styles. As far as Dickens style is concerned, I think you'll find a lot of authors have copied it, adding a slight twist here and there to try to copy there idol's amazing work. ...read more.