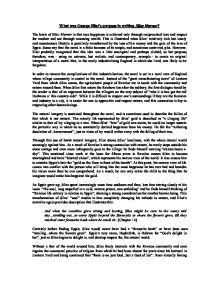 What was George Eliot's purpose in writing Silas Marner?

What was George Eliot's purpose in writing Silas Marner? The basis of Silas Marner is that true happiness is achieved only through reciprocated love and respect for another and not through amassing wealth. This is illustrated when Silas' relatively rich, but lonely and monotonous lifestyle is positively transformed by the loss of his money and the gain of the love of Eppie. Some say that the novel is a fable because of its simple, and sometimes contrived, plot. However, Eliot probably recognised that this idea was a little unoriginal and perhaps clich�d, so her purpose, therefore, was - using an extreme, but realistic and contemporary, example - to create an original interpretation of a moral that, in the newly industrialising England in which she lived, was likely to be forgotten. In order to remove the complications of this industrialisation, the novel is set in a rural area of England where village community is central to the novel. ...read more.

It also causes him to mistake Eppie's hair for "gold on the floor in front of the hearth". At this point, his narrow view of life comes into conflict with the person who will bring him the most happiness he has ever had and broaden his vision more than he can comprehend. As a result, he can only relate the child to the thing that he imagines would make him happiest: his gold. As Eppie grew up, Silas spent increasingly more time outdoors and thus, less time staring closely at his loom. "His soul, long stupefied in a cold, narrow prison, was unfolding" and he finds himself thinking of "Raveloe life entirely in relation to Eppie", showing a strong consideration for another human being. This transformation of Silas' "soul" results in him completely changing his attitude to nature, and Eliot's narrative again provides description that illustrates this: And when the sunshine grew strong and lasting, Silas might be seen in the sunny mid-day...strolling out...to carry Eppie beyond the Stone-pits to where ...read more.

his heart to be able to forgive the injustice he suffered in his native town: he has effectively come to love his enemy, as the Bible teaches. By unjustly forcing Silas from his industrial home-town and moving him to an unfamiliar agricultural village like Raveloe, Eliot shows that even a man as bitter and isolated as Silas can love others, despite his initial experience of betrayal and a "shaken trust in God and man". Eliot uses natural imagery to remove the industrial layers of society familiar to her contemporary reader, in order to expose pure human kindness, and because it is a child who entered Silas' life, there is only the possibility of pure love, unblemished by l**t. Ironically, it is this kindness and pure love possessed by human beings that separates us from the natural, and perhaps animal, world. To be truly happy and to avoid a hollow life, as Silas had, we must look through the confusions of modern living, like money, and find love in those around us. ...read more.