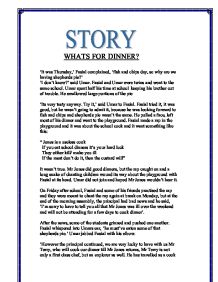 WHATS FOR DINNER? 'It was Thursday,' Fasial complained, 'fish and chips day, so why are we having shepherds pie?' 'I don't know?' said Umar. Fasial and Umar were twins and went to the same school. Umar spent half his time at school keeping his brother out of trouble. He swallowed large portions of the pie 'Its very tasty anyway. Try it,' said Umar to Fasial. Fasial tried it, it was good, but he wasn't going to admit it, because he was looking forward to fish and chips and shepherds pie wasn't the same. He pulled a face, left most of his dinner and went to the playground. Fasial made a rap in the playground and it was about the school cook and it went something like this: " Jones is a useless cook If you eat school dinners it's your hard luck They either kill/ make you ill If the meat don't do it, then the custard will" It wasn't true. Mr Jones did good dinners, but the rap caught on and a long snake of chanting children wound its way about the playground with Fasial at its head. Umar did not join and hoped Mr Jones wouldn't hear it. ...read more.

'Everything is gone and sir is waiting,' said Umar. 'I know' said Fasial. "He'll think we've scrap school." When Umar told sir that there was nothing in the pond, Mr Chotia said That only this morning Mr Terry was saying that pond is 'well stocked'. Mr Chotia told the twins to sit down and told Sameer and Nawaz to try their luck. 'Hey Umar!' Whispered Fasial, his brother looked at him and he had a funny look on his face 'I have a thought' "Listen, you know what sir said about Mr Terry?" "What about it?" 'He said the pond was well stocked, right? And now it isn't, and we had the delicious dinner, only we did not know what it was? "What's dinner got to do with it?" Umar looked at his brother. No Fasial, that's just sick. It's impossible. "Is it?" Fasial asked Umar "What was that green soup and the meet and those crunchy bits in the ice cream?" Before Umar could reply, Sameer & Nawaz came back with an empty jar. On Tuesday, dinner turned out to be better than Mondays. Fasial & Umar kept their suspicions to themselves. ...read more.

'What did you cook, Terry?' 'Epsatsc' said the chef. ' Never heard of it,' said the head. 'What is that?' 'It's a Greek dish' said Mr Terry smoothly, easily fooling the head. On Friday everybody brought sandwiches, but they didn't have to as Mr Terry had gone, Mr Jones was back and they spotted him crossing the playground at five to nine, all the kids cheered. The kids got their sandwiches and chucked it in the bin, Fasial's rap was dead. Dinner wasn't fish & chips, but no one complained. Everybody had the food even Fasial. Everybody felt contented. As the school week drew to a close, everybody relaxed. At half-three, the kids ran to the field with joy and happiness, Fasial and Umar were in no rush and stood at the top looking at the gardener, who seemed lost. 'What's up, Mr Hasan?' enquired Fasial. 'There were a pile of nice, fresh horse manure here this morning and now its gone,' Replied the gardener The twins looked at each other. Mr Jones was coming down the drive. They ran to him. 'Mr Jones!' cried Fasial. 'That Mr Terry-he has left, hasn't he?' The cook nodded. 'Yes, dear, I'm afraid he has but don't worry- he left me his recipe book. Its just amazing the meals you can get out of stuff you find lying around.' ...read more.