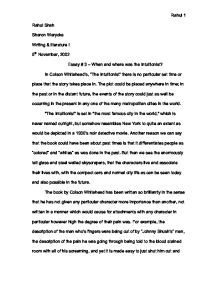 When and where was the Intuitionist? Colson Whitehead

Rahul 1 Rahul Shah Sharon Warycka Writing & literature I 5th November, 2002 Essay # 3 - When and where was the Intuitionist? In Colson Whitehead's, "The Intuitionist" there is no particular set time or place that the story takes place in. The plot could be placed anywhere in time; in the past or in the distant future, the events of the story could just as well be occurring in the present in any one of the many metropolitan cities in the world. "The Intuitionist'' is set in "the most famous city in the world,'' which is never named outright, but somehow resembles New York to quite an extent as would be depicted in a 1930's noir detective movie. Another reason we can say that the book could have been about past times is that it differentiates people as "colored" and "whites" as was done in the past. But then we see the enormously tall glass and steel walled skyscrapers, that the characters live and associate their lives with, with the compact cars and normal city life as can be seen today and also possible in the future. ...read more.

ridiculed before having been awarded his job, and Lila Mae being the second and also at the same time being a woman inspector which in itself was quite a revolution, says that there was not a lot of equality at the time a thing that is now considered the past, as people now to be less discriminative, and are giving equality a fair chance. Then there are characters like that of the investigative journalist Ben Urich who can be placed any where in time in the past, the present and the future. The presence of corporate wars tells us that it could be in the present or the future. It is about a time where the mega-corporations are so engrossed in ways to make higher profits that they will go to great lengths to sabotage their rivals and spy on them so as to not let their rivals get ahead of them. It is set in a time where the authoritative figures of the city have contacts with the mob, who use each other ...read more.

James Fulton was a black man who had discovered that he could pass as a white man and so he lived his life like one, up until he got tired and started writing the book which was meant to be a joke, which sadly no one got, but instead everyone took seriously. In the book Lila Mae's character is shown to be searching for the blue-prints to a perfect elevator called the black box, which would take people Rahul 4 higher up into a better world. The book considers the elevator as a complex metaphor and more so the black box. It is supposed to represent a spiritual ascension, which would lead the people up and away from their present grim and corrupt world into a better place. Then again maybe the setting of the story is not relevant as the book deals with the problems of race and gender bias, politics and the struggle for power and more money, all elements of the life led by people today, in the past and possibly in the future as well. ...read more.