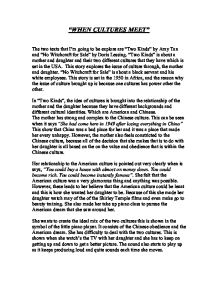 When cultures meet, seen in &quot;Two Kinds&quot; by Amy Tan and &quot;No Witchcraft for Sale&quot; by Doris Lessing.

"WHEN CULTURES MEET" The two texts that I'm going to be explore are "Two Kinds" by Amy Tan and "No Witchcraft for Sale" by Doris Lessing. "Two Kinds" is about a mother and daughter and their two different cultures that they have which is set in the USA. This story explores the issue of culture through, the mother and daughter. "No Witchcraft for Sale" is about a black servant and his white employees. This story is set in the 1950 in Africa, and the reason why the issue of culture brought up is because one cultures has power other the other. In "Two Kinds", the idea of cultures is brought into the relationship of the mother and the daughter because they have different backgrounds and different cultural identities. Which are American and Chinese. The mother has strong and complex to the Chinese culture. This can be seen when it says "She had come here in 1949 after losing everything in China" This show that China was a bad place for her and it was a place that made her every unhappy. ...read more.

An all her early memories are American but her mother is Chinese values. This is shown when it says "the sound was comforting and remained me of the cows jumping over the moon" this shows that she did not find anything Chinese comforting and she has grown but with American society. At first she attempts her mother ways and was very obedient, but the she starts to question it and thinks that she should be able to think freely. This reveals the difficulty in their cultural understanding the mother is Chinese inside and American on the surfaces and the daughter is vice veers. This is made clear in the symbol of her face in the mirror. This shows that the daughter wants to be herself and not what her mother wants her to be. These ideas are the very images of what she is inside. The title is therefore important because they are two kinds of people in the same world. Also they are two kinds of generation with different. The issue of culture that is brought up in the relationship between Teddy and Gideon because of the two different types of cultures and the realistic changes that happens. ...read more.

This is seen when they want Gideon to show what he used to help Teddy get better. But he does not instead he makes them walk around for hour and say that he can not remember what leaf it was. The Europeans think that they can just seat back and talk about what everyone already knows. It seem that the two cultures different values in many of the things that is around them. The Europeans want their way to win, because they want to have power over the other culture. This is clear in the story when the scientist comes and wants to take away Gideon knowledge that he has of the land and what lies within it. Gideon however mange's to keep some of his power because he does not revel the secret of the land. In conclusion the two stories explore similar issues , because you have to generations and a relationship between two people. They are also similar because they both deal with culture that are different but are set with the same thing around them. They are different however in the sense "two kinds" is that the mother and daughter are both Chinese but in "no witchcraft for sale" you have two different brackgrounds. ...read more.