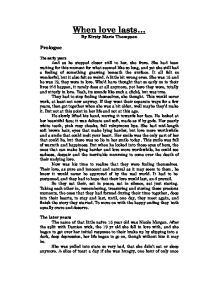 When love lasts... By Kirsty Marie Thompson Prologue The early years And as he stepped closer still to her, she froze. She had been waiting for this moment for what seemed like so long, and yet she still had a feeling of something gnawing beneath the surface. It all felt so wonderful, but it also felt so weird. A little bit wrong even. She was 15 and he was 19, they were in love. Who'd have thought that so early on in their lives it'd happen, it rarely does at all anymore, yet here they were, totally and utterly in love. Yeah, its sounds like such a clich�, but was true. They had to stop fooling themselves, she thought. This would never work, at least not now anyway. If they went their separate ways for a few years, then got together when she was a bit older, well maybe they'd make it. But not at this point in her life and not at this age. He slowly lifted his hand, moving it towards her face. He looked at her beautiful face; it was delicate and soft, made as if by gods. Her pearly white teeth, pink rosy cheeks, full voluptuous lips. She had mid-length soft brown hair, eyes that make lying harder, but love more worthwhile and a smile that could melt your heart. ...read more.

After seeing his mate in this state, Damien realised he had to go back to the world, and once again get a firm grip on reality. Nicole lived life like everyone her age, after, of course, the initial shock at the loss of the best relationship she was to know. She finished up at school. She went on to college. She moved to America. She went on to university their. She went on, grew up and got over it. Nicole, shortly after moving, got a job in a hotel as a part time maid. She kept it up all through university for extra money, to pay for her student's life, she kept it up afterwards, moving onto full time first obviously, as a way to maintain a pay check, for life in general. It was just for now she tried to convince herself, just until she got her dream job, or at least until something better came along. That was about 8 years ago. And she's still working at the same hotel. Damien, on the other hand, didn't follow suit like a brainless, mindless sheep and not attempt to try and make something of his life. Once he snapped out of his anti-social bubble, he realised that if he was ever going to get anywhere he needed to focus and work hard to become someone. ...read more.

Damian picked up the New York Times, turned it over, and read today's headline. Another celebrity, another story and another delicious scoop of gossip he'd spoon fed to his readers. He had gotten up late this morning; he ended working late into the night putting on the 'finishing touches' to an article that he'll no doubt change about five times before he's happy with. It meant he was late for a meeting this morning and had to rush about. He hurriedly made a few necessary calls and practically ran to the office; he ended up bumping into some poor civilian. Well not just some civilian, some woman. Actually it was some amazingly beautiful, sweet, kind and sincere woman. And yes he knew all this from a glance, an apology and a feeling of familiarity. He'd been thinking of her all morning, and he couldn't help it, her face just kept popping up everywhere, and it was only quarter past twelve. He knew he ought to forget all about her, he knew that he would probably never see her again, and even if he did what could he do? If by some miracle she wasn't already taken, and chances of that are slim, he thought, what would he do? Just walk up to her and say, 'hey do you remember me? We bumped into each other and I haven't stopped thinking about you since, want to go out sometime?' I doubt it, he thought to himself. ...read more.