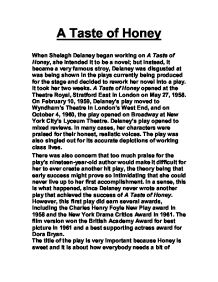 When Shelagh Delaney began working on A Taste of Honey, she intended it to be a novel; but instead, it became a very famous play

A Taste of Honey When Shelagh Delaney began working on A Taste of Honey, she intended it to be a novel; but instead, it became a very famous stroy, Delaney was disgusted at was being shown in the plays currently being produced for the stage and decided to rework her novel into a play. It took her two weeks. A Taste of Honey opened at the Theatre Royal, Stratford East in London on May 27, 1958. On February 10, 1959, Delaney's play moved to Wyndham's Theatre in London's West End, and on October 4, 1960, the play opened on Broadway at New York City's Lyceum Theatre. Delaney's play opened to mixed reviews. In many cases, her characters were praised for their honest, realistic voices. The play was also singled out for its accurate depictions of working class lives. There was also concern that too much praise for the play's nineteen-year-old author would make it difficult for her to ever create another hit play, the theory being that early success might prove so intimidating that she could never live up to her first accomplishment. In a sense, this is what happened, since Delaney never wrote another play that achieved the success of A Taste of Honey. However, this first play did earn several awards, including the Charles Henry Foyle New Play award in 1958 and the New York Drama Critics Award in 1961. The film version won the British Academy Award for best picture in 1961 and a best supporting actress award for Dora Bryan. The title of the play is very important because Honey is sweet and it is about how everybody needs a bit of sweetness in their lives. During the 1950's people paid more attention to their families and neighbours, but in comparison to the 21st Century nobody has time to interfere in other people's lives because they don't have enough time to deal with their problems of their own. ...read more.

Helen's language shows how she has no care in the world. The way in which Jo communicates to and about people compared to the way in which she communicates with her own mother they have no respect for each other and argue continuously, in comparison to the way they talk to others and then talk to one another is like they have a Jackel and Hyde character.They both are so alike that is the reason why their personalities clash and hence the arguements. They keep putting each other down at any given oppertunity. Jo does try to patch up their relationship but Helen doesn't seem to care which really hurts Jo and yet she can't tell anyone or do anything about it. Helen treats her daughter as someone she doesn't really want in her life. There are exceptions to this, but it is a prevailing attitude. It is particularly shown when Helen goes on her honeymoon. Jo expressed her need to be cared for, or perhaps her desire to be wanted and included in her mother's life when she says to Peter, ".... What are you going to do about me Peter? The snotty nosed daughter? Don't you think I'm a bit young to be left like this on my own while you flit off with my old woman?" Helen's response is, "We can't take her with us. We will be, if you'll not take exception to the phrase, on our honeymoon." This behaviour is then continued by not including Jo in Helen's marriage ceremony. There is no attempt at communication about Jo's welfare or needs at this time, and Helen leaves for her wedding with the words, "I'll be seeing you. Hey! If he doesn't show up I'll be back." In fact Helen doesn't come back for months, leaving Jo to her own devices to survive. These interactions already quoted highlight something else that, although a quiet theme in the drama, nevertheless remains constantly in the background. ...read more.

We are meant to sympathise with them because we feel that they have been treated unfairly by their own family and if their own family treats them in this way then society isn't going to treat them any differently, and it wasn't their fault but in those days people were so backward and they never moved on with time. We all give them our sympathy because how they have been treated as they were growing up, they both have had a tough childhood being picked on by everyone for being gay or being in a single parent family then as they both got older they were still being discriminated because Geoff lived on the streets before meeting Jo, as he was kicked out of his last place because the landlord was not happy of his sexuality. People were saying that Jo ended up like her mother her life wasted at such a young age. At the end of the day Jo and Geoff are both still young children and they both get love from each other that they never got, to date. So they look for this love and they give it to each other in certain ways These two are still little children and are having to growup in the adult world. Having a full time job, paying rent and expenditures, having to save money and thinking about tomorrow. Jo got fed up of having to run away from their home when it came to paying the rent so she even paid the money in advance to stay in her flat, she vowed not to be like her mum. Society judged Jo they would say she is going to end up like her mum. They have both had a tough upbringing and therefore they know what the other person is going through so they both encourage each other, to be content with what they both have in life. ...read more.