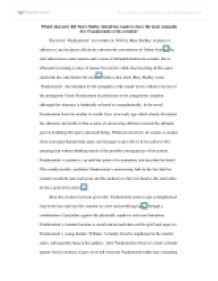 Which Character Did Mary Shelley Intend For The Reader to Have Most Sympathy On: Frankenstein or His Creation?

Which character did Mary Shelley intend the reader to have the most sympathy for: Frankenstein or his creation? The novel "Frankenstein" was written in 1818 by Mary Shelley; in places it adheres to, and in places effectively subverts the conventions of Gothic fiction. The said subversions create tension and a sense of defamiliarisation in a reader, this is effectual in creating a sense of unease but can be a little disconcerting all the same; much like the calm before the storm. I believe that when Mary Shelley wrote 'Frankenstein', she intended for the sympathy of the reader to be evoked in favour of the protagonist Victor Frankenstein in preference to his antagonistic creation; although this character is habitually referred to sympathetically. In the novel, Frankenstein loses his mother to scarlet fever at an early age which clearly devastates his character and instils in him a sense of unwavering defiance towards his ultimate goal of instilling life upon a deceased being. Whilst at university, he creates a creature from scavenged human body parts and manages to give life to it; he achieves this amazing feat without thinking much of the possible consequences of his actions. ...read more.

This is undoubtedly what sparks his enthusiasm for science but it does not do much to prepare him for his study of "natural philosophy" when he attends university at Inglestadt. When he first arrives at Inglestadt, he goes to visit one of his tutors, hoping to make a good first impression and appear eager and willing to learn, showing both his enthusiasm for the subject and respect for his future tutor. However he is met with a stout man with a "repulsive countenance" who informs Victor, upon hearing his list of previous reading, that "every instant that you have wasted on those books is utterly and entirely lost." This is a huge anticlimax for Victor and this immediately manipulates the sympathy of the reader in Victor's favour. This is important as the sympathy for Victor must be strong enough for the reader not to feel utterly repulsed by his later transgression. It will also provide Victor with deniability, as he has been mistreated by his tutor and possibly feels the need to prove that the research carried out by his first inspirers was not in vain. Victor has a very close relationship with his mother before her premature death; some interpreters may even go as far as to imply that he suffers from the Oedipus complex, and holds passionate feelings towards her. ...read more.

One technique used is dramatic setting, "the surface is very uneven, rising like the waves of a troubled sea." The words troubled sea carry connotations of formidable weather and a faint sense of woe. This sets the scene for a miserable and desperate confrontation between creator and creation, and I think the sympathy is at this point transferred to the creation, as he has had to cross the sea of ice without the help or comfort of any man-made aids, and probably with little sustenance of real nutritional value. Another technique used during Frankenstein's meeting with his creation is emotive language, for example "Devil, do you dare approach me?" This fierce greeting shows us just how anguished Frankenstein is but somehow renders his creation more worthy of the reader's sympathy; this is possibly because he doesn't really know that he has done anything wrong, he has just responded to the way people have treated him. In inference, I think that Mary Shelley intended for the sympathy of the reader to be evoked in favour of Frankenstein rather than his creation, but for the issue to be largely open-ended. I believe that when the novel was written, Frankenstein's creation would have been feared rather than disliked particularly; but in today's superficial society, it would be almost unanimously hated just for being different. ...read more.

This essay shows an articulate, well informed understanding of the novel and the context it was written in. With more frequent quotations, concise narration and more emphasis on our response to the creation, it would have achieved a top grade. ****