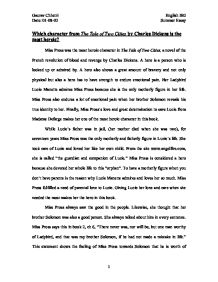 Which character from The Tale of Two Cities by Charles Dickens is the most heroic?

Which character from The Tale of Two Cities by Charles Dickens is the most heroic? Miss Pross was the most heroic character in The Tale of Two Cities, a novel of the French revolution of blood and revenge by Charles Dickens. A hero is a person who is looked up or admired by. A hero also shows a great amount of bravery and not only physical but also a hero has to have strength to endure emotional pain. Her Ladybird Lucie Manette admires Miss Pross because she is the only motherly figure in her life. Miss Pross also endures a lot of emotional pain when her brother Solomon reveals his true identity to her. ...read more.

Miss Pross always saw the good in the people. Likewise, she thought that her brother Solomon was also a good person. She always talked about him in every sentence. Miss Pross says this in book 2, ch 6, "There never was, nor will be, but one man worthy of Ladybird, and that was my brother Solomon, if he had not made a mistake in life." This statement shows the feeling of Miss Pross towards Solomon that he is worth of Lucie and did not make a mistake in his life. Miss Pross thought that he was a hard working man where in reality he was a spy working for both France and England. ...read more.

Her love to Ladybird gives her the strength to fight back Madame Defarge and later kill her. While facing Madame Defarge, Miss Pross becomes deaf for her whole life. Her determination and courage makes her truly the most heroic character in this novel. Miss Pross was the most heroic character in The Tale of Two Cities by Charles Dickens. One can see the heroic thing that Miss Pross did the every step of the novel. First from the beginning she took care of orphaned Lucie like her own child then later she bears so much emotional pain when her brother tells her his true face. At last she shows her bravery when she fights the evil Madame Defarge to save her Ladybird. All this three traits makes her the hero in this epic. Gaurav Chhetri English IB2 Date: 01-08-02 Summer Essay 2 1 ...read more.