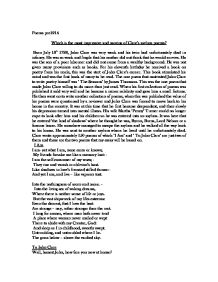 Which is the most impressive and moving of Clare&amp;#146;s asylum poems?

Poems pre1914 Which is the most impressive and moving of Clare's asylum poems? Born July 13th 1793, John Clare was very weak and his twin had unfortunately died in infancy. He was so weak and fragile that his mother did not think that he would survive. He was the son of a poor labourer and did not come from a wealthy background. He was not given many provisions such as books. For his eleventh birthday he received a book on poetry from his uncle, this was the start of John Clare's career. This book stimulated his mind and was the first book of many to be read. The one poem that motivated John Clare to write poetry himself was ' The Seasons' by James Thomson. This was the one poem that made John Clare willing to do more than just read. When his first collection of poems was published it sold very well and he became a minor celebrity and gave him a small fortune. He then went on to write another collection of poems, when this was published the value of his poems were questioned by a reviewer and John Clare was forced to move back to his house in the country. It was at this time that he first became despondent, and then slowly his depression turned into mental illness. ...read more.

He is showing that they have become so dissocialised that even the strange unknown people to him are more close then his own flesh and blood. I think that his friends and family behaved in this way because they were frightened of him, not realising that he was the same person but was just ill. I think that for his children it would have been very arduous as they were very young and did not realise why their father had been sent away and why he had changed. I also think that his friends had become distant, as they did not know how to behave around him. In the third stanza, the rhythm of the poem changes to (ABABCC), this stanza describes Clare's view and ideas of heaven, and his view is very harmonious. "A place where women has never smiled or wept." Clare is showing the sadness that is on earth in all of mankind and that, when one is in heaven you do not show emotions, as they are not viewable because it is only the soul that is living. He also says, "And sleep as I in childhood, sweetly swept. /Untroubling, and untroubled where I lie." Clare states that heaven would be like his childhood. I think that Clare's most memorable moments took place in his childhood, and that is the place, which he wishes he could still be in. ...read more.

' To John Clare' has many positive points, it shows that he did not always feel so pessimistic and did remember good and happy memories, this gives me the impression that when John Clare was sad he wrote a poem to show his emotions, and another about good things in life to 'cheer himself up'. Both poems are very impressive because the values of the poem differ from one another, both have good qualities and amenities that they need, John Clare although a mentally ill person has proved one way of expressing himself, and had doctors watching his every move. Mental illness doesn't stereotype a person as a 'freak'. It just means that the way in which one thinks is different. He is physically active and for him to do such a marvellous thing, such has writing poetry has not just given us the pleasure in reading his wonderful masterpieces, he has also become an 'role model' figure, to other patients that belong to a mental institutions that there is another way of communicating even though the way in which their mind works is different. I feel that both poems have done John Clare justice showing us both sides of his character. I am sure that John Clare will be a poet whose effect will stay with me forever. ...read more.