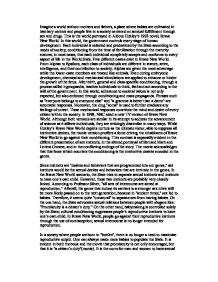 While Huxley presents his Brave New World as a hopeless environment lacking love and real happiness, the movie offers a glimpse of hope in its ending: it shows that a young boy voluntarily disconnects his conditioning process

Imagine a world without mothers and fathers, a place where babies are cultivated in hatchery centers and people live in a society centered on sensual fulfillment through sex and drugs. This is the world portrayed in Aldous Huxley's 1932 novel, Brave New World. In this world, the government controls every stage of human development. Each individual is selected and predestined by the State according to the needs of society; conditioning from the time of fertilization through the maturity ensures, in most cases, that each individual completely accepts and conforms to every aspect of life in the World State. Five different castes exist in Brave New World. From Alphas to Epsilons, each class of individuals are different in stature, attire, intelligence, and their contribution to society; Alphas are given the most advantage while the lower-caste members are treated like animals. Even during embryonic development, chemical and mechanical stimulations are applied to enhance or hinder the growth of the fetus. After birth, general and class-specific conditioning, through a process called hypnopaedia, teaches individuals to think, feel and act according to the will of the government. In this world, adherence to societal values is not only expected, but also enforced through conditioning and mass propaganda. Phrases such as "everyone belongs to everyone else" and "a gramme is better than a damn" are automatic responses. Moreover, the drug "soma" is used to further eradicate any feelings of unrest. These mechanical responses constitute the mind and desire of every citizen within the society. In 1998, NBC aired a new TV version of Brave New World. Although both versions are similar in its attempt to address the advancement of science as it affects individuals, they are strikingly dissimilar in many ways. ...read more.

There is this drive inherent in him to seek a relationship that is merely based on sex. Even though he cannot identify the reason of its existence, it is this drive that ultimately leads him and his lover to escape from civilization. This drive is the instinctive desire of humans to produce one's own children. While the State conditions individuals to use contraceptives in all sex acts at all times, the human reproductive instinct cannot be that easily repressed. The fact that the movie ends with Bernard holding his own baby and walking on the white sandy beach of the "savage world" suggests that his reproductive instincts have overcome the conditioning that is forced upon him. This is a positive note to illustrate that there is still hope in a society that is dominated by government control and conditioning. Close analysis on another character can further uncover the struggle between instinct and conditioning in Brave New World. Huxley presents Lenina Crowne as young, pretty, popular sex partner. Even though she is conditioned like everyone else to be promiscuous, she admits that sometimes she is not too keen on promiscuity. Evidence of her disobedience to the State motto that "everyone belongs to everyone else" can also be drawn from her long (four months!) and focussed relationship with one man. Her preference to monogamy suggests the possibility of an inherent force working against her cultural conditioning. Since there is no advantage for females to have more than one sex partner, it is reasonable to assume that genes for monogamy can be present in females. However, in the book she is mostly depicted as "meat" and a product of social conditioning. ...read more.

Throughout the movie, we get screenshots of this young boy frowning, as if he realizes that something is wrong with the world. Moreover, in the ending, his actions leave a provoking statement that suggests a victory over cultural conditioning. It suggests the presence of a stronger force driving the inhabitants of Brave New World to go against their conditioning. This force constitutes the instincts, the "desires and behaviors that are programmed into our genes," that is inherent in human beings. Therefore the movie presents a comeback by nature to overcome nurture. The story of Brave New World presents a scary scenario of government control, regulations on reproduction, and a resulting lack of love in society. The battle between nurture and nature takes place. The State represents the nurturing factors that influence the behavior of individuals; the genes that provide the individuals with instinctive behaviors represent nature. While Huxley's Brave New World hails nurture as the ultimate winner, able to suppress all instinctive desires, the movie version proposes that instinctive desires can drive the inhabitants of Brave New World to go against their conditioning. The movie acknowledges the powerful instinctive desires that counter the conditioning of people. However, after examining both versions of Brave New World, one cannot help feeling entrapped by the society that one lives in. Through a careful analysis of both the book and the movie version of Brave New World, it becomes evident that our world is not so different from Brave New World. Society conditioning induces individuals to strive for better careers, more money, and larger properties. Happiness is often derived from the fulfillment of sensual pleasures and the pursuit of a luxurious life. In Brave New World, we are shocked by the amount of influence that social conditioning exerts on individuals. However, who is to say that we are not under similar influences today in our very own world? ...read more.