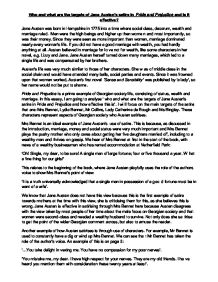 Who and what are the targets of Jane Austens satire in Pride and Prejudice and is it effective?

Who and what are the targets of Jane Austen's satire in Pride and Prejudice and is it effective? Jane Austen was born in Hampshire in 1775 into a time where social class, decorum, wealth and marriage ruled. Men were the high beings and higher up then women and most importantly, so was their money. Since they were seen as more important than women, marriage dominated nearly every woman's life. If you did not have a good marriage with wealth, you had hardly anything at all. Austen believed in marriage for love not for wealth, like some characters in her novel, e.g. Lizzy and Jane. Jane Austen herself turned down many marriages, which led to a single life and was compensated by her brothers. Austen's life was very much similar to those of her characters. She was of middle class in the social chain and would have attended many balls, social parties and events. Since it was frowned upon that women worked, Austen's first novel 'Sense and Sensibility' was published by 'a lady', so her name would not be put to shame. Pride and Prejudice is a prime example of Georgian society life, consisting of status, wealth and marriage. In this essay, I am going to analyse 'who and what are the targets of Jane Austen's satire in Pride and Prejudice and how effective this is'. I will focus on the main targets of the satire that are: Mrs Bennet, Lydia Bennet, Mr Collins, Lady Catherine de Bough and Ms Bingley. These characters represent aspects of Georgian society who Austen satirises. Mrs Bennet is an ideal example of Jane Austen's use of satire. This is because, as discussed in the introduction, marriage, money and social status were very much important and Mrs Bennet plays the pushy mother who only cares about getting her five daughters married off, including to a wealthy man and thrives on gossip. ...read more.

We can see that Austen has based the character very much on herself. This certain 'comment', is placed in the novel for humour. Lizzy challenges Lady Catherine, and all of the time, Lizzy comes out on top. This is very effective because many people would back down to people like Lady Catherine, but we can see the rebelliousness from Austen's characters, and probably how she herself would have acted in a situation similar to this. Because of her wealth and her social status, Lady Catherine believes her instructions should be followed without question. An example of this is found at the end of the novel when she demands Lizzy not to marry Darcy. 'Obstinate, headstrong girl! I am ashamed of you! Is this your gratitude for my attentions to you last spring?' This shows that Lady Catherine is following the conventions of Georgian society and trying to impose her will and status to get Lizzy to obey her. This outburst shows her horror and disbelief that a young lady of low status likes Lizzy would dare speak to deny her what she wants. This is effective because it highlights the aspect of Georgian society which Austen disagrees with and also it strikes a reaction with the reader because Lizzy is the heroin of the story and Lady Catherine is an arrogant and obnoxious character. In the first passage about Mr Collins, we can automatically presume what his character is like: 'Mr Collins was not a sensible man and the deficiency of nature has been but little assisted by education or society. A fortunate chance had recommended him to Lady Catherine de Bourgh when living of Hunsford was vacant; and the respect, which he felt for her high rank. Mingling with a very good opinion of himself, of his authority as a clergyman'. Jane Austen voices her opinion in this quote and soon we can see that he lives up to his reputation. ...read more.

She was one of the few girls who did not act like this. She shows them up through the character of Lydia and this amuses the audience. Another way in which Austen satirises Georgian society through the character of Lydia is after the marriage scandal with Wickham, when she shows complete lack of consideration for her family and their reputation. On page 261, we see full disregard: 'Well mamma...what do you think of my husband? Is not he a charming man? I am sure my sisters must all envy me. I only hope they may have half my good luck...' This quote shows that despite Lydia's scandalous actions, sham of a wedding, the fact that she could have ruined her sisters' chances of marriage and brought shame on her family, she still thinks she is better than her sisters and is proud of her marriage. This use of satire is effective because this sparks a reaction with the reader. The fact she has broken nearly every rule in the etiquette handbook of Georgian society and still wants to be treated with respect is totally ridiculous. In conclusion, Jane Austen uses satire very effectively throughout the novel Pride and Prejudice. She does this mainly through the use of effective characterisation, especially in the five characters that I have discussed. Austen bases a lot of what happens in the novel on her actually life. She would have been very similar to her character Lizzy and would have attended many social events and balls. When Lizzy and Darcy marry, their pride is collapsed and especially takes the toll on Darcy, since he was very much at the top of the food chain. They take the risk of losing friends and respect and marry for love, unlike what some from Georgian society would have done. Their marriage of love was not what Jane Austen managed to achieve in her life. Humour, anger and love are shown throughout the novel. These factors together add to the shear magnificence of the novel and show what Georgian society could have been like for certain people. ...read more.