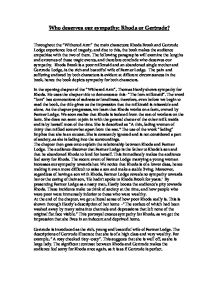 Who deserves our sympathy:Rhoda or Gertrude

Who deserves our sympathy: Rhoda or Gertrude? Throughout the "Withered Arm" the main characters: Rhoda Brook and Gertrude Lodge experience lots of tragedy, and due to this, the book makes the audience empathise with the two of them. The following paragraphs will examine the lengths and extremes of these tragic events, and therefore conclude who deserves our sympathy. Rhoda Brook is a poor milkmaid and an abandoned single mother and Gertrude Lodge, is the rich and beautiful wife of Farmer Lodge. The pain and suffering endured by both characters is evident at different circumstances in the book, hence the book depicts sympathy for both characters. In the opening chapter of the "Withered Arm", Thomas Hardy shows sympathy for Rhoda. He uses the chapter title to demonstrate this- "The lorn milkmaid". The word "lorn" has connotations of sadness or loneliness; therefore, even before we begin to read the book, the title gives us the impression that the milkmaid is miserable and alone. As the chapter progresses, we learn that Rhoda works on a farm, owned by Farmer Lodge. We soon realise that Rhoda is isolated from the rest of workers on the farm. She does not seem to join in with the general chatter of the other milk maids and is by herself most of the time. ...read more.

Her words show frustration and disgust, suggesting that even though she is insulting her, at the same time she desires to be like her. However, Rhoda's jealousy towards Gertrude soon evolves into an obsession, which results in Rhoda despising her to such extremes, that she cannot even bear the sight of her-"could raise a mental image of the unconscious Mrs Lodge that was realistic as a photograph". This phrase demonstrates that Rhoda constantly thinks about Gertrude. Her disturbing infatuation with Gertrude soon ends in a ghastly and unpleasant dream about her, in which she is being suffocated and taunted by a hideous and monstrous Gertrude. During the dream, Rhoda tries to defend herself, and in doing so violently strikes Gertrude's arm. As a result of Rhoda's attack, Gertrude is peculiarly affected by it in reality. Her arm soon becomes disfigured in the same place Rhoda hurt the confronting spectre, in her dream. Hardy illustrates Gertrude as being humble and caring. This compassion is portrayed in Gertrude bringing new boots for Rhoda's son. Gertrude's gentle character makes the audience feel sorry for her. We feel as if she does not deserve a deformed arm, and hence the blame turns to Rhoda, as Gertrude's distorted arm is a consequence of Rhoda's spite. ...read more.

This portrayal makes the reader feel sorry for Rhoda as she is terribly distraught. It makes us think about the perils and suffering she has experienced throughout her life, and how her life was incredibly demanding. No one deserves to undergo so much disaster and pain, and get nothing in return. Rhoda is infuriated when she discovers Gertrude is present at the hanging and is using her dead son to cure her arm. At this instant, we feel even more sympathetic towards Rhoda as even her final moments with her son have been spoiled by Gertrude, and thus, she adds to the sorrow and anguish Rhoda is feeling. In conclusion, I think that Rhoda deserves most of the sympathy. This is because her difficulties in life considerably outweigh Gertrude's troubles. Ever since the beginning of the book, Rhoda has been suffering. There is no point in the book where she is a happy woman. She spends all her life, making a comfortable world for her son, without the help of his father. It was only natural for her to feel jealous of Gertrude, hence her envy was justified. She did not intentionally hurt Gertrude, and so she is not the root cause of the Gertrude's misery. She may have been the trigger, but it was Gertrude's actions that brought distress in her life. Rhoda represents the lower class society. She is a victim of social classing and gender. ...read more.