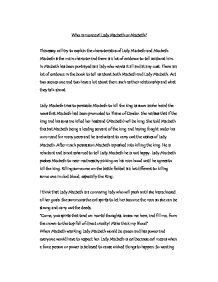 Who is more evil Lady Macbeth or Macbeth?

Who is more evil Lady Macbeth or Macbeth? This essay will try to explain the characteristics of Lady Macbeth and Macbeth. Macbeth is the main character and there is a lot of evidence to tell us about him. In Macbeth has been portrayed as a lady who wants it all and at any cost. There is a lot of evidence in the book to tell us about both Macbeth and Lady Macbeth. Act two scenes one and two have a lot about them such as their relationship and what they talk about. Lady Macbeth tries to persuade Macbeth to kill the king as soon as she heard the news that Macbeth had been promoted to Thane of Cawder. She realises that if the king and his sons are killed her husband (Macbeth) will be king. She told Macbeth this but Macbeth being a leading servant of the king and having fought under his command for many years and he is reluctant to carry out the wishes of Lady Macbeth. After much persuasion Macbeth is pushed into killing the king. ...read more.

How do we no from the book that Macbeth really is sorry he does not seem very sorry when he is king? Although Lady Macbeth pushed him to commit the murder he did not have to and if he was really loyal to the king I think I would not have murdered the king no matter what. As soon as Lady Macbeth realised that she has the chance to be queen she jumps with joy and immediately plans how to become queen quicker and how to get Macbeth to do all her slanderous deeds. It becomes apparent that Macbeth is somewhat of a moral coward. This could be seen as a positive attribute as it shows the weaknesses of Macbeth, and asks could Macbeth be fully responsible if he is not totally independent? He changes his mind about the murder a number of times. He deceives Banquo by telling him he is going to let the natural order prevail but then changes his mind again when Duncan announces that his son Malcom is to be his successor. Macbeth intends to destroy this. ...read more.

This is proof that Lady Macbeth has transformed Macbeth into being a greedy, cold-hearted human being, by saying things such as "Are you a man?" She undermines his masculinity, to make him feel at fault, and have it her way. Eventually, Lady Macbeth is driven to Madness by the guilt she holds on her shoulders, and ends up committing suicide. If it weren't for Lady Macbeth, Macbeth would have never killed anyone. The way Macbeth questions and thinks about killing the king shows that he knows that killing the king is wrong and that he will feel guilty if he does so. On the other hand, Lady Macbeth never questions or worries about killing the king. She never worries that they will be caught and never worries that she will feel guilty. Unlike Macbeth, she never weighs up what they are going to do and instead jumps straight into it without thinking. In my opinion Macbeth is fare more guilty as he actually carried out the murder. If I had to sentence Macbeth I would give sentence him for manslaughter. Lady Macbeth did push him but it is no excuse for the several murders he caused. By David Sycamore ...read more.