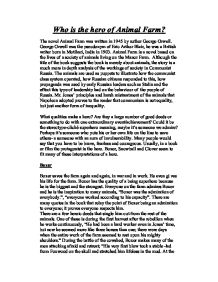 Who is the hero of Animal Farm?

Who is the hero of Animal Farm? The novel Animal Farm was written in 1945 by author George Orwell. George Orwell was the pseudonym of Eric Arthur Blair, he was a British writer born in Motihari, India in 1903. Animal Farm is a novel based on the lives of a society of animals living on the Manor Farm. Although the title of the book suggests the book is merely about animals, the story is a much more in depth analysis of the workings of society in Communist Russia. The animals are used as puppets to illustrate how the communist class system operated, how Russian citizens responded to this, how propaganda was used by early Russian leaders such as Stalin and the effect this type of leadership had on the behaviour of the people of Russia. Mr. Jones' principles and harsh mistreatment of the animals that Napoleon adopted proves to the reader that communism is not equality, but just another form of inequality. What qualities make a hero? Are they a large number of good deeds or something to do with one extraordinary event/achievement? Could it be the stereotype-clich� superhero meaning, maybe it's someone we admire? Perhaps it's someone who puts his or her own life on the line to save others- a someone with an aura of invulnerability. Many people would say that you have to be brave, fearless and courageous. Usually, in a book or film the protagonist is the hero. Boxer, Snowball and Clover seem to fit many of these interpretations of a hero. ...read more.

Maybe Boxer would do anything Napoleon asks. An effect of this phrase to the other animals would be that it would make other animals not question the decisions of Napoleon because many animals would do what Boxer does because Boxer does have influence. Everything about Boxer seems to screams that he is the hero but there are strong reasons against this conclusion. Firstly Boxer is not in the whole novel, which could signify that Orwell did not mean Boxer to be the hero. Secondly, he has the flaw of blind faith outlined in is brainlessness. Boxer is too stupid to realise that he is being used by Napoleon this greatly annoys the reader. Boxer doesn't fight for his rights or for the animal's rights. This tells us that Boxer is nothing without a brain. A simple fact is Boxer could never save the inhabitants of Animal farm form the tyranny of Napoleon because of his lack of common sense and knowledge. If there were any chances of him doing so, it would be through Benjamin. Thirdly, Boxer doesn't know what is good for him - a bit like a baby. Against the advice given by a Clover and Benjamin, Boxer works too hard eventually leading to his downfall. Isn't a hero meant to know when to stop? Fourthly, although he is a major character, we never know Boxer's thoughts apart from his two frequent maxims. Finally, an arguable point is that Boxer never set himself up to be hero, which tells us that he was doing what he thought was right. ...read more.

Clover has also made it through the worst times and lived to tell the tale, which is quite extraordinary considering what she has been through. Clover is a much more subtle character than Boxer and Snowball, therefore Orwell hasn't associated her with any particular big feat and although she is cleverer than Boxer, she just cant grasp what deception is being employed by Napoleon. Boxer, Snowball and Clover are all very good candidates to be called the hero of animal farm but really I think there can be only one hero, Boxer. Purely on his strength, determination and fearlessness Boxer has managed to get the farm out of every laborious difficulty and battle. If it were not for him the book might not even have gotten past chapter 3. Time after time we are told that everyone is inspired and admires Boxer, everyone, including the reader, adores him. The point that states Boxer isn't in the whole novel that is against him being a hero, I say that he is in most of the novel anyway. It is not Boxer's fault he doesn't do anything to stop Napoleon - it is Benjamin's. Benjamin knew full well what was going on and yet didn't tell anyone, if he told Boxer, Napoleon could be stopped. Boxer has a large number of heroic deeds to his name and the largest number of positive points out of the three individuals, that's why Boxer is my hero of animal farm. I think Orwell didn't intend to have a hero in the first place, simply because he is concerned with politics in this book, not individuals. ...read more.

This essay shows a good understanding of characters but the structure needs work. The strengths and positions of each character should be analysed in a comparative way as the essay progresses, rather than each one taking up a section of the essay.